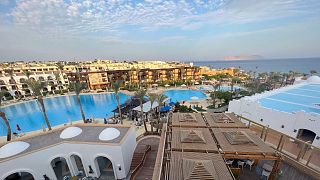 Restrictions on access to COP27 - including hosting it in an isolated resort - will curb civil society participation in the event, activists have warned   -   Copyright  Reuters
By Charlotte Elton  with Reuters  •  Updated: 01/11/2022

Egypt’s decision to hold COP27 in a highly secured tourist resort will curb civil society participation in the event, activists have warned.

The November 6-18 climate summit - hosted in Sharm el-Sheikh - is the first annual U.N. climate conference to be held after the easing of COVID-19 restrictions.

But climate campaigners are unlikely to be able to protest and rally freely.

Public demonstrations are effectively banned in Egypt, and activists have struggled to operate legally amid a far-reaching crackdown on political dissent.

Situated at the southern tip of Egypt's Sinai peninsula, Sharm el-Sheikh is bordered by the sea on one side and a concrete and wire barrier in the desert on the other.

It is only reachable by air, or by roads studded with checkpoints that run north towards the Suez Canal, the border with Israel, and North Sinai, where Egyptian security forces have been waging a counter-insurgency campaign.

Activists are expecting a "significantly quieter and much more regulated" COP this year, said Hossam Bahgat, head of the Egyptian Initiative for Personal Rights (EIPR) and one of Egypt's best known campaigners.

"It's going to be virtually impossible for anyone who is not accredited for the conference itself to be able to access the city during the conference period.”

Why do campaigners have concerns about access at COP27?

Egypt, which has just one non-governmental organisation permanently accredited to attend the annual summits, says inclusion of civil society is a priority, and it has helped add more NGOs including 35 Egyptian groups through a single-year admission valid only for COP27.

That was a positive step but the process was not publicly announced and did not give some groups a fair chance to apply, said Bahgat.

"As a result, the list of accredited organisations does not include a single human rights organisation and none of the independent human rights groups in Egypt, including those that are working on the nexus of human rights, environmental justice and climate justice," he said.

A spokesperson for Egypt's COP presidency said in a written response to questions that there had been a "fully transparent" selection process approved by the U.N. after consultation with regional organisations and national negotiating teams.

Egyptian groups were recommended based on their environment and climate change expertise, the spokesperson said.

A U.N. climate change spokesman said there had been around 10,000 registrations from almost 2,000 admitted observer organisations for COP27, which was similar to COP26 in Glasgow.

But this month a group of independent experts appointed by the United Nations Human Rights Council warned that past crackdowns on NGOs and activists had created a "climate of fear".

A petition led by 12 Egypt-focussed rights groups has called on Egypt to address restrictions on civil society, saying "effective climate action is not possible without open civic space".

Because of the lack of local residents in the remote tourist resort, a traditional "global day of action" during the summit would be marked elsewhere around the world but not in Sharm el-Sheikh, said Tasneem Essop, head of the Climate Action Network, which includes more than 1,500 civil society groups.

"Certainly we're very alive to the fact that Sharm el-Sheikh is an enclosed space, very controlled, very curated," she said.

Will climate activists be able to afford hotel rooms?

Some of those hoping to travel from outside Egypt have been put off by hotel prices that ran into hundreds of dollars per night earlier in the year.

After lobbying from civil society, the government negotiated a $120 price cap for two-star hotels and announced cheaper accommodation in recent weeks.

That included rooms for 400 young people at about $30-40 a night, and was designed to help African groups overcome long-standing obstacles to accessing COP summits, said Omnia el-Omrani, COP27's youth envoy.

Omar Elmawi, an East African climate campaigner and member of the COP27 Coalition who has sought a visa to travel to the summit, said the offer of cheaper accommodation had been too slow to arrive.

"We're still in this big problem around access for our people from Africa," he said, citing flight and hotel costs and uncertainty over visas as barriers to attendance. A highly regulated summit could limit the airing of "the really hard questions that need to be asked", he said.

Egyptian officials have said hotel prices are driven by market forces and peaceful protests will be welcomed during the summit, with designated spaces created for them.