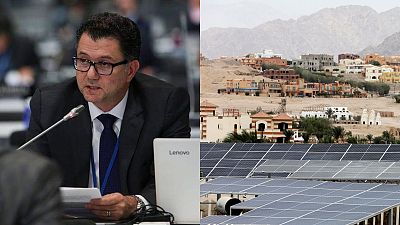 Ambassador Mohamed Nasr, alongside a view of solar panels on a hotel rooftop in Sharm el-Sheikh. The resort town is turning to clean energy in the run up to COP27.   -   Copyright  Supplied/Reuters   -
By Lottie Limb  & Rosie Frost  •  Updated: 16/10/2022

COP27 is fast approaching, the biggest annual meeting of world leaders attempting to shift the dial on climate change.

After another record year of climate-related disasters, the urgent need for global action is plain to see, particularly to those at the sharpest ends.

But few are privy to exactly what needs to happen to ensure that action is achieved. Once the summit starts on 6 November, it can be tricky to follow the technical details from afar.

To understand more about how Egypt will be approaching the conference, we spoke to Ambassador Mohamed Nasr, the country’s chief climate negotiator.

Each country brings multiple negotiators to COP27; each must balance their own priorities with those of other nations’ delegates.

Amb. Nasr has plenty of experience in this arena. A diplomat for the Egyptian Ministry of Foreign Affairs, he has also been a lead negotiator on finance for African Group of Climate Change Negotiators (AGN) since 2009.

Here’s what he had to say in the run up to the vital UN Climate Change Conference.

What opportunities does the COP27 Presidency present for Egypt?

As the Presidency, we are here to serve and facilitate discussions between the UNFCCC Member States, rather than to represent any specific interests - we are doing all we can to ensure the concerns of developing countries and the Global South are heard, and most importantly responded to with the urgency they demand.

We aim to restore the ‘grand bargain’ at the centre of international climate talks.

In particular, we aim to restore the ‘grand bargain’ at the centre of international climate talks - whereby developing countries agree to increase their efforts to tackle a crisis for which they are not responsible, in return for much more financial support from those who have historically benefited more from fossil fuels.

This means more support and technology transfer for the green transition, more support for adaptation to the impacts already taking place, and more support for developing countries to pursue their sustainable development goals, including access to energy for all.

This is also an opportunity for the whole world to look back at the events of the past few years, and to acknowledge that we have an increasingly urgent common interest in tackling this climate crisis together - but also to respect that our situations and capacity are quite different. So let those with the most resources both increase and implement their own commitments and provide more support to those of us with fewer resources, so we can build a more sustainable world together.

How will the Presidency impact Egypt's climate efforts?

I would separate the work of the COP Presidency from the climate policy of Egypt itself. As COP President, Egypt will bring countries together around common interests, to create a more conducive atmosphere to tackle the major challenges we face as a global community.

Specifically, if we can successfully encourage more affordable finance for the green transition, and for adaptation, and if we can foster greater learning and technology transfer between countries, all of us - including in Egypt, but throughout Africa and the Global South - will be in a better position to raise our ambitions and, essentially, better put our national climate transition plans into practice.

What are the main issues Egypt is hoping are addressed at COP27?

There are many challenges before us at COP27, but I would focus on two main points.

First, all countries must both increase their ambition and, crucially, move to implementation – and to ensure there is no backsliding in our commitments to accelerate the green transition. This includes both cutting and removing emissions faster, and creating a transformative adaptation agenda to prepare and protect us from the climate impacts we can no longer avoid.

Second, we must find the means to pay for this in a manner that is just and equitable. That means splitting the bill fairly, where those who have emitted the most pay the bulk of the costs.

In 2009, developed countries promised to provide $100bn a year in climate finance by 2020 – yet still haven’t done so. I would add that this is a floor rather than a ceiling, and falls far short of what is needed.

This should not be a question of competition between nations - we are all in this together.

We must think more creatively and about how to provide these funds, and sooner rather than later. This should not be a question of competition between nations - we are all in this together. An investment in climate action anywhere benefits people everywhere.

Countries must also honour the Glasgow pledge to double adaptation finance by 2025. And we must confront the issue of loss and damage suffered by the world’s most vulnerable people. Too long have we failed to take this issue seriously; the moment for action has now arrived.

Importantly, all these elements must be tackled. Higher ambition, faster implementation, and the necessary fair financing must all be addressed together if we are to succeed.

How is Egypt hoping the conversation around loss and damage funding can progress?

We acknowledge this has been a contentious issue, and we have not seen the progress we would have wished so far. However, we also believe that it is an issue that can no longer be ignored - and that the very concept of climate justice demands we find a way forward.

The simple reality is that developing nations are paying the highest price for climate change, despite contributing the least to its making. Around the world we see how heatwaves and droughts, fires, storms, and floods are devastating societies - with millions of people now facing famine, disease, agricultural collapse, and an intensifying battle for resources.

The only good news – though I would hesitate to call it such - is that recent climate tragedies have received worldwide attention, leaving no doubt as to the terrible and unfair impacts of climate change.

The only good news - though I would hesitate to call it such - is that recent climate tragedies have received worldwide attention, leaving no doubt as to the terrible and unfair impacts of climate change. There is now a growing acknowledgment of the disproportionate suffering of communities in the developing world; the question is what do we do about it.

We do see a general acceptance that loss and damage must in some form be addressed. The difficulty, as usual, is in the details; how do we define and finance this? We have seen some steps in a positive direction. The recent announcement by the Danish government to provide ‘loss and damage’ funding for developing countries in the Sahel region and elsewhere sets an example we hope others might follow.

Are there any discussions that you think Egypt is better equipped to bring to the table than, for example, the UK was last year?

Without making any comparisons to the excellent work of past presidencies, I would say that Egypt is well and perhaps uniquely placed to act as a bridge between the Global North and South, as well as between competing great powers. We have a long and successful diplomatic tradition of acting as mediators and conciliators, and believe our geographic, political, and economic situation can help us play that role effectively.

Egypt is well and perhaps uniquely placed to act as a bridge between the Global North and South.

Does that make us better equipped? I would not make such a claim. What I can say is that I see a broad willingness of countries from around the world to engage with our good offices, and that we intend to use all our skills and influence to help bring the parties closer together.

We are proud to host the COP27 delegates in our wonderful city of Sharm el-Sheikh, and hope that its welcoming people and natural beauty can provide some inspiration to fight for the people and planet we all care for.

How has the geopolitical context of the conference changed between COP26 and now?

This is clearly a difficult time. We have seen rising geopolitical tensions between great powers, worldwide food and energy shortages, and growing conflict, let alone the continued impacts of climate change, poverty, and the pandemic. Over recent months, effective cooperation has been challenged in many forums. The question is how that might affect COP27.

I have heard some concerns that this meeting may become a casualty of these trends. We suggest the opposite.

I have heard some concerns that this meeting may become a casualty of these trends. We suggest the opposite: COP27 creates a unique opportunity for us to recognise our mutual interest in tackling this climate crisis together. So perhaps even more than last year, this year’s conference provides an opportunity to come back together and set multilateral action back on track. Let us take advantage of what it offers.

I would also add that beyond these challenges, we also see many grounds for hope. Societies are adapting, devising new technologies, adopting new forms of collaboration, recommitting to protect nature. Investment in climate tech is booming, from renewables, to new carbon removal technologies, to electric transport. Clean energy continues to get cheaper every year. So, while the situation is difficult, there is a lot happening that is quite encouraging. The challenge now is to make it happen faster, more broadly, and more fairly.

A big point of contention last year in Glasgow was accessibility for delegates - particularly those on the front lines of the climate crisis. Will COP27 be easily accessible for those parties?

The COP27 presidency is committed to enabling an inclusive COP as vibrant as any other and we have set out how we will enable views from around the world to be represented at Sharm el-Sheikh. For this, we have worked with our sisters and brothers in Africa and also with others back home to allow for enhanced participation of African and Egyptian NGOs, which lead to granting single time accreditation to more than 40 NGOs, and an ever-increasing number of passes for the NGOs.

Egypt’s legacy for diplomacy means that we understand the importance of partnership and collaboration amongst all stakeholders to deliver the action we need now.

People will be able to make their voices heard, showcase solutions, and engage freely in this critical global conversation.

To enable this, we have provided more than 30,000 square metres of space, almost double the space in Glasgow, for international organisations, significantly expanding the original proposed area, to accommodate the significant demand across the globe to participate at COP27.