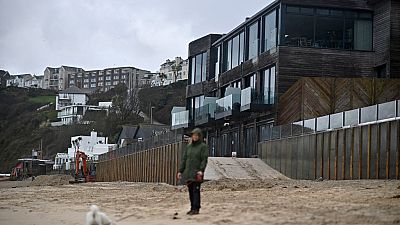 Cornwall Council’s planning enforcement team has been asked to investigate building work being carried out at the hotel hosting the G7 summit in June.

Concerns have been raised by local residents, campaigners and councillors that “ancient trees” have been removed by Carbis Bay Hotel - a claim the resort denies. Cornwall resident and plant science student at the Eden Project, Megan Middleton called it “a direct assault on Cornish culture and ancient values”.

“The hotel should pride itself in preserving the beautiful Cornish landscape for its guests to see, otherwise soon Cornwall will become one big grey city by the sea.”

She explains that, though we might think of medicinal and spiritual plant use in more tropical locations, there is a long history “on our doorstep”.

"If public consciousness is shifted to value local nature in the same way as far away nature is portrayed in David Attenborough then people might fall in love with it again and want to protect it," Middleton says.

She adds that it can be difficult to know the age of coastal scrub as windy conditions mean slow-growing species like hawthorn stay close to the ground.

Local councillor, Andrew Mitchell, said that this was a “sensitive issue” because of the summit but added that this “cannot and must not be an excuse for the planning system to be ridden roughshod over”.

The Carbis Bay Hotel, which has in the past won awards for its eco-credentials, defended its clearing of the land saying there has been a “misunderstanding on social media”. It adds that it can “confirm that this was not ancient woodland and there are no badger sets on this piece of land”.

Instead, it says the land cleared was a “small self-seeded scrubland” on which work was started a few years ago.

“The investments in the estate over recent years, including our on-site Energy Centre, have cemented Carbis Bay’s position as one of the UK’s best and greenest destinations, in one of the most beautiful bays in the country,” the hotel said in a statement.

“We are working closely with a local landscaping team to increase planting in this area replacing the scrubland with a plethora of trees and plants more suited to the coastal environment.”

Why are world leaders travelling to Cornwall?

Heads of government from Canada, France, Germany, Italy, Japan, the United Kingdom and the United States are expected to travel to south-western UK county in June this year for the G7 Summit. St Ives, Falmouth, and Carbis Bay are some of the locations that will play host to the intergovernmental organisation.

Ahead of important environmental talks at COP26 later this year, the climate crisis is top of the agenda for the world leaders at the June summit.

The UK government says Cornwall has been chosen as the location as it is “already a powerhouse for green innovation”.

“As the most prominent grouping of democratic countries, the G7 has long been the catalyst for decisive international action to tackle the greatest challenges we face,” said Prime Minister Boris Johnson.

He called Cornwall the “perfect location for such a crucial summit”.