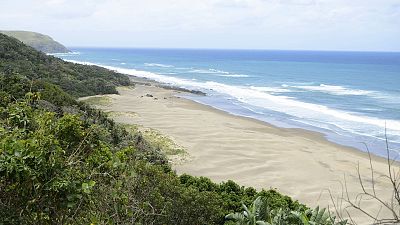 Shell is planning to search for oil and gas on the South African coastline, a move that will threaten whales during mating season.

The oil giant is going to conduct underwater explosions to locate deep-sea oil and gas reserves, with vessels at sea for five months starting 1 December. They will travel between Morgan Bay in the south and Port St Johns - an area known as the Wild Coast.

These explosions generate loud shock wave emissions which penetrate through three km of water and 40 km into the Earth’s crust below the seabed, harming marine life in the process.

Although the survey will not involve drilling at this stage, it raises broader concerns around sea pollution, climate change and South Africa’s national energy policy. As well as fears about the future development of the region if Shell were to discover commercial quantities of oil or gas off this coast.

Kickback from activists on the ground

But the exploration plans are being met by fierce opposition by environmental activists in South Africa, some hailing from Cape Town’s branch of Extinction Rebellion.

A petition by Oceans Not Oil Coalition was started to try and get Barbara Creecy (South Africa’s Minister for the Environment) to revoke Shell’s permit and currently has nearly 363,000 signatures.

It says the explosions will leave whales, dolphins, seals, penguins, sharks and even crabs “panicked and damaged”, adding that the ship will work around the clock, firing air guns every 10 seconds.

“At a time when world leaders are making promises and decisions to step away from fossil fuels because climate science has shown we cannot burn our existing reserves (let alone drill for more),” it adds, “offshore oil and gas Operation Phakisa is pushing ever harder to get its hands on a local supply of gas.”

"Shell's activities threaten to destroy the Wild Coast and the lives of the people living there. South Africa's problems do not require violent extraction nor destruction of the environment and community livelihoods.

“The best and most immediate solution is a just transition to renewable energy, ensuring safe and decent/work jobs, and energy access for all," he explains.

With the memory of the #MauritiusOilSpill so fresh in our minds, we CANNOT allow this to happen again.

We WON’T let Shell destroy the Wild Coast in the name of greed! >> https://t.co/eqqvBLoHd7#FossilFoolspic.twitter.com/NkKrcDzdME

Tracy Carter describes herself as a concerned South African citizen, whose family come from the Wild Coast in the Transkei. She also spoke to Euronews Green about how devastated she would be if the Shell exploration goes ahead.

“To give you an idea about the Wild Coast, where my family come from, it is the most incredibly breathtaking place one could ever dream of. The ocean is lush and abundant with sea life in all shapes and sizes,” she says.

“I was honestly shocked that after the COP26 summit Shell had the gall to go ahead with the seismic surveys when the world is meant to be moving away from fossil fuels. There was absolutely no public notice given to South Africans about this matter.”

Tracy stresses that it’s important to make as many people as possible aware that this “heinous act” is going on.

South Africa is one of the best destinations worldwide for watching whales and dolphins. Annual visits from humpback and southern right whales and the presence of enormous pods of dolphins all year-round provide amazing viewing opportunities both from land and boats.

Southern right and humpback whales migrate to southern Africa’s warmer waters between June and December, to mate and rear calves.

The whales’ annual visits from Cape Town to Mossel Bay are in fact so predictable that the south coast is also known as the ‘whale route’ and a whale festival is held every year at Hermanus.

Shell’s disruptive surveys will begin just as these whale families start making their way back to icy feeding grounds in Antarctica this year, meaning many could be harmed or killed along the way.

“Having grown up in one of the most unspoiled areas left on this planet and watching the migration of whales over the years, it means a lot to me to fight for the protection and conservation of this area and the sea life that will be affected if this seismic survey goes ahead,” adds Tracy.

In response to concerns about how underwater blasting would affect the marine environment, a Shell spokesperson told New Frame, “the impacts are well understood and mitigated against when performing seismic surveys. This is supported by decades of scientific research and the establishment of international best practice guidelines.

“There is no indication that seismic surveys are linked to (whale and dolphin) strandings,” they conclude.