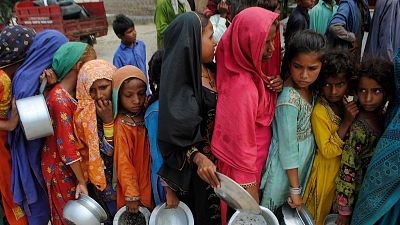 On Tuesday, it became the first country to offer “loss and damage” compensation for those in the most climate vulnerable regions of the world.

“I saw for myself in Bangladesh this spring that the consequences of climate change need increased focus,” Denmark’s development minister Flemming Møller Mortensen said when announcing the funds.

It is grossly unfair that the world's poorest should suffer the most from the consequences of climate change to which they have contributed the least.

“It is grossly unfair that the world's poorest should suffer the most from the consequences of climate change to which they have contributed the least.”

He added that it was time for action, not just words.

Where will Denmark’s loss and damage funding go?

The Danish foreign ministry said in a statement that 35 million Danish crowns (€4.7 million) will go to an organisation based in Frankfurt, Germany that subsidises insurance in poorer countries.

A further 32.5 million Danish crowns (€4.4 million) will go to the ministry’s “strategic partnerships with civil society, which work with climate-related loss and damage”. There will be a special focus on the Sahel region which spans North Africa’s Sahara desert.

Another 25 million Danish crowns (€3.4 million) are being spent on “strategic efforts” which can support current climate change negotiations in the run-up to COP27.

According to the Danish government, the final 7.5 million crowns (€941,314) will be given to civil society actors working in developing nations to improve resilience to the impacts of climate change.

Loss and damage is a ‘fundamental question of climate justice’

The pledge was made during a ministerial meeting on the sidelines of the United Nations General Assembly in New York.

In his address to the assembly, UN secretary-general Antonio Guterres asked member states to tax the windfall profits of fossil fuel companies and redirect the money to countries suffering from loss and damage.

“Loss and damage are happening now, hurting people and economies now, and must be addressed now - starting at COP 27,” he said.

This is a fundamental question of climate justice, international solidarity and trust.

“This is a fundamental question of climate justice, international solidarity and trust.”

So far only Scotland and the Belgian region of Wallonia have pledged money for loss and damage - but neither are members of the UN. This makes Denmark the first UN member state to offer this funding.

The ongoing struggle for loss and damage funding

Ahead of COP27 in November, some of the nations most vulnerable to the effects of climate change are pushing for a funding facility for loss and damage to be established.

This was also a major topic of conversation at last year’s COP26, with major polluters like the US and EU opposing the creation of a separate fund to address this issue.

But the need to help countries pay for damages caused by climate consequences has never been more apparent.

After recent severe flooding affected one in seven people in Pakistan - around 33 million people - the country’s foreign minister Bilawal Bhutto Zardari said that loss and damage must be on finance the agenda at COP27.

He expressed hope that a decision could be reached at the international conference, to be held in Egypt, for a financial mechanism to compensate developing countries for these often catastrophic impacts of climate change.