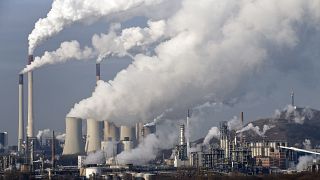 New figures reveal that air pollution spiked around the coastline of the Southern Mediterranean last month.

It was particularly bad in southern Spain and Italy with big cities recording the worst measurements, according to air quality monitoring company Airly.

The biggest problem during the summer season is a higher concentration of nitrogen oxide from increased traffic in these areas.

"Among many cities on the coastline, the most polluted are on the coast of Spain, which is the regions of Murcia, Barcelona and Malaga, but also on the Black Sea coast of Nessebar and Italy like Puglia, Marche and Campania," says Wiktor Warchałowski, CEO of Airly.

"The reason for this may be a rather large increase in temperature which was observed in the second part of June 2022."

He says that both long and short term exposure to air pollution has been associated with health impacts.

One of the most polluted locations, according to Airly, is Athens followed by Barcelona and Milan. The measurements serve as a warning for those looking to visit these popular holiday destinations this year.

"It's probably better to avoid these cities," Warchałowski says.

Where is the air quality in Europe good?

It isn't all bad news, however. Warchałowski says that Airly's research detected some parts of Europe with air pollution levels well under daily recommended levels.

The Alps, for example, which are famous for their very clean air, came well within safe limits.

"We observed that the best air quality on the Baltic coast was in towns in Poland and Germany, and also on the south coast of the UK in Southampton. These are probably the windiest places," Warchałowski says.

"Pretty good results have been recorded also on the northern coast of Italy, Slovenia, Croatia, Greece, and in the Black Sea Basin, with the exception of Bulgaria."

These areas, he adds, are probably the safest to travel to.

Watch the video above to hear about the most polluted places in Europe.