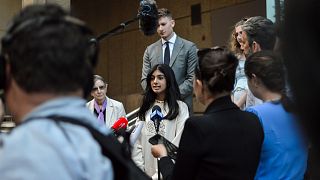 Anjali Sharma speaking after last month's court hearing, during which the 'duty of care' precedent was overturned.   -   Copyright  Anjali Sharma
The opinions expressed in this article are those of the author and do not represent in any way the editorial position of Euronews.
By Anjali Sharma  •  Updated: 08/04/2022

Anjali Sharma is a 17-year-old climate justice activist from Melbourne, Australia. In 2021 she and seven other students took the environment minister to court over a coal mine extension, successfully establishing that the government had a duty of care to protect Australian children from climate change. The government appealed and last month the court overturned the decision. Here Anjali reflects on her journey so far, and the hateful responses she received to her open letter to Prime Minister Scott Morrison following the case.

After finishing her Year 12 studies, she wants to be an environmental lawyer. Outside of the courtroom, Anjali has been organising with School Strike for Climate since she was 13.

Last month, I wrote an open letter to Scott Morrison which was published in a national Australian paper. I told him a story about my legal team, a story about my family, and I urged him to govern like he’ll have to live with the impacts of his governing for decades to come.

Since writing that letter, the praise and support has been overwhelming, but it hasn’t been enough to drown out the negativity. Of course, nothing ever is. In work like this, backlash is expected as part and parcel, because climate change - be it so incredibly relevant and so widely expected - is still highly politically divisive.

There’s been something different about the retaliation to this open letter in The Saturday Paper, however. Sure, I’ve received my fair amount of condescending comments, pure racism or misogyny, and even death threats, and I guess, in that respect, this is really just another rodeo.

But, it’s not. This letter was born purely out of heartbreak and anger - anger that eight children had to spend two years in a legal sparring match with the Australian government.

Anger that after the common law accepted the modern challenge of climate change threatening society today, the very people who are meant to protect us from such challenges appealed their duty of care. Anger that they won. That the Federal Court, after recognising the unique and devastating impacts that climate change will have on my generation, decided not to impose a duty of care. And the backlash to all this anger feels much more personal.

Peppered in and amongst the nonsensical threats, body shaming, and personal attacks, some key themes begin to stand out.

In September 2020, seven young climate activists and I filed a case in the Federal Court of Australia arguing that the Federal Environment Minister owed all Australian children a “duty of care” to protect us from the impacts of climate change. After more than half a year, we were successful at first - which was novel and incredibly groundbreaking. But last month, we lost this case on appeal by the Environment Minister, and this duty, which we had worked so hard to establish, was overturned.

However, the Federal Court, one of Australia’s highest institutions, accepted all of the evidence put to them about the impacts of climate change on younger generations. This evidence was not cross examined by the Federal Environment Minister Sussan Ley and her legal team, and was rarely in question.

The impacts of climate change on young people “may fairly be described as catastrophic."

The trial judge, Justice Bromberg, found that the impacts of climate change on young people “may fairly be described as catastrophic, particularly should global average surface temperatures rise to and exceed 3C beyond the pre-industrial level.”

The battle here was on whether or not the Minister has a duty of care to protect children from these impacts. The threat of climate change and whether it is real or not was never in dispute.

Yet still, some have commented on this legal battle with a lens of pure climate denial. They simply do not have a leg to stand on.

“Do we even need to care this much about climate change?”

The law has nothing to do with your feelings, I’ve been told. You’re a little kid, relax, enjoy life. To those people, I say, I am. I’m enjoying life, I have the best friends, an amazing family, a beautiful dog, and even a good few hobbies. I have a roof over my head and my favourite thing in the world is watching the sun rise and set, especially at the beach. My life is beautiful. Simply beautiful.

My community in India, if asked, would say the exact same thing.

My community in India, if asked, would say the exact same thing. They can talk, enraptured, about the beauty of their lives for as long as anyone will lend an ear. But this doesn’t change the fact that while we, here, fall asleep every night without a single thought about whether our homes and livelihoods will be intact in a few days time, they don’t have this privilege. Not only are they on the frontlines of the climate crisis, and being constantly devastated by the increasing frequency and severity of natural disasters, when needed, they won’t even have sufficient resources to rebuild.

There are communities that still do not have clean tap water following the 2017 Delhi floods. There is critical infrastructure that still has not been repaired, and there are lives that have been lost forever.

“Why don’t you sue India and China?”

So as we shift our focus to the angle of climate justice, another key theme of the hate I’ve been targeted with is the responsibility of Australia compared to India, and other major polluting countries, such as China. I’ve been called a bloody migrant, ungrateful, and a series of colourful insults that insinuate that I’m some sort of secret agent, trying to undermine the government and strengthen India’s. To that I say - how much time do you think I have on my hands?

These comments are usually coupled with some incoherent thing or other about the caste system, poverty, or incredibly detailed descriptions about how much worse my life would be as a female in India - incredibly detailed. But, as long as it makes sense to them, I guess.

By virtue of global citizenry, every country has the responsibility to decarbonise.

In all seriousness however, of course every country has the responsibility to begin to rapidly divest from fossil fuels and decarbonise, and pave a way forward for the world with climate justice at its very heart. This is just by virtue of global citizenry.

But how do we ignore the fact that Australia had already cemented its own economy on fossil fuels, while countries such as India and China had only begun developing their own? Doesn’t this lend itself to the fact that Australia has had a much larger, and arguably economically safer window to begin to divest and make the transition to an economy underpinned by renewable energy?

Isn’t it also true that Australia has a much more transparent and democratic legislative system in comparison to India and China, and thus has a much easier job in putting in place the legislation needed to accelerate our transition to renewable energy? Ensuring that this transition takes place at the speed that is being demanded globally?

We hear constantly from the government that Australia has reduced its emissions by 20 per cent pre-2005 levels, and at surface level it sounds amazing. But this statistic is completely contingent on factors separate from decarbonisation. Exclude emissions reductions from land use, including agriculture, and our emissions have risen by 7 per cent in that same time period.

Plus, are we really comparing ourselves to India and China in the context of global affairs? Isn’t that a bit embarrassing?

My fight for climate justice in Australia goes on

So yes, the Federal Court ruled against us in finding a duty of care between the Federal Environment Minister and Australian children. This doesn’t show that climate change isn’t real, that our case was based on feelings and lacked any substance, that Australia is in fact a global leader on climate action, as Scott Morrison likes to claim.

It shows that the common law is not adapting to modern challenges, but above all it highlights that Australia is now well and truly the climate pariah of the world.

Despite any Federal Court ruling, any negative comment or any climate denial from our government or our wider community, the litigants and I will not back down.

I made this clear in my letter to Scott Morrison, that he must not forget our names, because we’ve got a lot more fight in us.