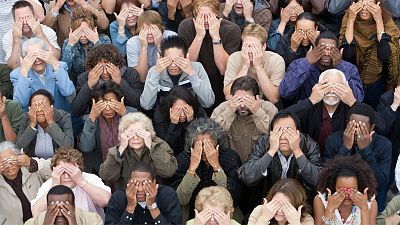 Eco-fascism is undergoing a revival, but it’s not as obvious as the influential eco-fascists Garrett Hardin or Pentti Linkola used to make it, it’s more subtle - which makes it even more dangerous.

The ordinary person might be unaware that they’re partaking in it, all the while spreading views like the belief that immigration is the cause of the climate crisis, without realising that this theory has a history of eugenics and population control.

Eco-fascism argues that humans are overburdening the planet and that some populations are more of a problem than others.

While I understand the intentions behind statements such as, “we’re running out of resources” and “there’s not enough to meet growing populations”, it’s important to think about the victims of these statements. When we’re talking about resources running out, it is not because of population growth but rather mismanagement of resources.

This power to distribute resources is beyond the average consumer and beliefs like these often derail the climate conversation by condemning those who are the least to blame.

What are the different approaches to environmentalism?

Before I go into the historical origins of eco-fascism, I think it's important to note that there are different approaches to environmentalism and not all climate campaigners have the same beliefs. Some look at environmental issues from a gendered lens, or an eco-ableism lens, so how disabled populations are affected and are more likely to struggle with evacuations, or enforced migrations.

When I look at environmental issues, as a black African and geographer, I look from a racial lens because environmental degradation increases the vulnerability of my community both in the UK and in my heritage countries, black communities.

A post shared by The Eco Justice Project (@ecojusticeproject)

The origins of eco-fascism

An essay by Thomas Robert Malthus entitled ‘The Principle of Population’ lays the groundwork for eugenics in climate discussions. Malthus theorised that when populations grow unchecked, they undergo exponential growth on a continuous time scale.

He makes a distinction between food as a necessity for human survival and a growth in population, noting that these two unequal powers must be kept equal and this can be done by monitoring and controlling populations.

Eco-fascists argue that some populations, black, brown and marginalised people, are more of a problem than others.

Eco-fascists argue that humans are oversaturating the Earth and that some populations, black, brown and marginalised people, are more of a problem than others.

At the core of eco-fascism is an ideology that blames the demise of the environment on overpopulation, immigration and over industrialisation, problems that followers believe could be solved through the mass murder of people in the Global South. They use the climate crisis as a veneer for racist beliefs.

Last year, a well-known environmentalist was filmed saying that a solution to the climate crisis would be to stabilise the human population to as low as we fairly can. This is an eco-fascist view. Language has meaning and language with racist undertones is both problematic and harmful to black, brown and marginalised communities.

Malthus’ theories are an introduction to eco-fascism but there is a long history of this theory being used to harm marginalised communities - such as the sterilisation of Puerto Rican women between the 1930s and the 1970s. Eugenics, a theory that suggests “undesirable” populations can be reduced or eliminated by controlling their breeding support. This was an operation which was carried out in order to decrease the high level of poverty and unemployment which the government blamed on overpopulation on the island.

It was believed that wiping out Puerto Ricans living in poverty, would make room for members of the population who eugenicists saw as being more “fit”. Under a policy that pressured women to undergo hysterectomies after their second child’s birth, one-third of Puerto Rican women were sterilised, many involuntarily.

Debunking the myth of overpopulation

Many parts of the world, specifically the Global North, are huge consumers and those living in the Global South are not only consuming less but don't get to keep what they produce due to borders and colonial power.

It is true that the population is rising but at a slower rate than some might think. Changes to population are normal and through centuries and decades, some populations will shrink if there is a decrease in birth rates and a rise in death rates and vice versa. An example of this is the baby boom following World War Two.

Advances in agriculture, transportation, public health and economic advancements have translated into fewer cases of disease, people continuing to have children as their chances to survive have increased and fewer people are dying, leading to ageing populations. Every country experiences changes to demographic transitions at different rates. While the population in some countries is decreasing, populations in others will be increasing or stay stagnant. That doesn’t necessarily mean that we are overpopulated.

By acknowledging the experiences of Black, brown and marginalised communities away from white supremacy and racial categorisations, we can attempt to reconstruct the green movement and move away from a Western-centred, colonial lens. We have to challenge the hierarchy of western knowledge and move away from a westernised framework, to expand climate discussions outside of the work of European classical scholars.