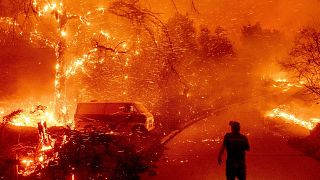 The UN has released a major new report outlining the impact of rising global temperatures on all living things.

“This report is a dire warning about the consequences of inaction,” says Hoesung Lee, chair of the Intergovernmental Panel on Climate Change (IPCC).

Written by leading climate experts from 67 countries, it warns that half of the world’s population is ‘highly vulnerable’ to the impacts of climate change. If we don’t cut carbon emissions now, consequences including flooding, crop failures and water shortages will accelerate in the coming decades.

Even temporarily surpassing 1.5C of global warming could result in severe impacts - some of which will be irreversible.

It also shows we are quickly running out of time to reverse the damage done from decades of burning fossil fuels and other activities that release greenhouse gasses.

“This report shows that climate change is a grave and mounting threat to our wellbeing and a healthy planet. Our actions today will shape how people adapt and nature responds to increasing climate risks,” says Lee.

“The scientific evidence is unequivocal: #climatechange is a threat to human wellbeing & the health of the planet,” – @poertner_hans

An ‘atlas of human suffering’

UN Secretary-General António Guterres called the report an “atlas of human suffering” adding that it is a “damning indictment of failed climate leadership.”

The world’s biggest polluters are guilty of arson of our only home.

“With fact upon fact, this report reveals how people and the planet are getting clobbered by climate change. The facts are undeniable. This abdication of leadership is criminal.

“The world’s biggest polluters are guilty of arson of our only home.”

What is the IPCC’s ‘assessment report'?

The IPCC releases large scale reports on the latest climate change research every six to seven years. This is the second in a series of reports expected from the IPCC in its sixth round of assessments.

Researchers from three working groups look at different aspects of the crisis: the scientific basis of climate change, impacts and vulnerabilities and how we tackle the problem. Each publishes its own report and the one released today comes from Working Group II.

The report looking at the basic science of climate change was released in August last year. It revealed that it was “unequivocal” that human activity is causing global warming with its findings described as “code red" for humanity.

The second, released today, shows how rising temperatures are likely to affect all living things on the planet - and the points of no return for adapting to climate change. 270 experts from 67 countries were involved and it was approved late on Sunday by 195 member governments.

The IPCC’s comprehensive assessment explores how a changing climate is likely to impact our everyday lives and the essential adaptions needed to prepare for the consequences that can no longer be avoided.

A warning from the Global South

In the wake of the report’s release, those on the front lines of the climate crisis say these risks are not a future threat but already a current reality.

“For the 3.3 to 3.6 billion people living in highly climate-vulnerable countries - almost all of whom are in the Global South - this report is not news,” explains Anabela Lemos from Friends of the Earth Mozambique.

“Those of us on the frontlines of the climate crisis have been shouting this from the rooftops for decades. Africa faces some of the worst impacts, and the hottest regions are already becoming intolerable.

Not one country on earth has avoided the impacts of climate change but for many in the Global South, the IPCC’s findings are not a surprise. Mortality from floods, droughts and storms was a staggering 15 times higher in highly climate vulnerable regions over the last decade, according to the report.

“For many, the climate emergency is already a matter of life or death, as homes and futures are on the line,” says Thandile Chinyavanhu, Climate and Energy campaigner for Greenpeace Africa.

She explains that communities in Mdantsane, South Africa have lost loved ones and their life possessions to climate change while residents of QwaQwa are unable to access vital health services or school as a result of extreme weather.

They broke it, now they have to fix it.

“But we will fight this together. We will go out on the streets, we will go to court, united for justice and we will hold to account those whose actions have disproportionately damaged our planet. They broke it, now they have to fix it."

What must be done to climate catastrophe?

To avoid the worst impacts outlined by the report, rapid action towards climate targets is needed. Experts say that keeping global warming below 1.5C is essential and to do that the world has to cut emissions by 45 per cent and achieve net-zero by 2050.

“The scientific evidence is unequivocal: climate change is a threat to human wellbeing and the health of the planet. Any further delay in concerted global action will miss a brief and rapidly closing window to secure a liveable future,” says Hans-Otto Pörtner, co-chair of IPCC Working Group II.

Urgent adaptation is also needed to deal with the increasing risks including weather extremes that already exceed what plants and animals can tolerate. The report acknowledges the crucial importance of fighting the interconnected nature and climate crisis together.

“Healthy ecosystems are more resilient to climate change and provide life-critical services such as food and clean water,” Pörtner explains.

“By restoring degraded ecosystems and effectively and equitably conserving 30 to 50 per cent of Earth’s land, freshwater and ocean habitats, society can benefit from nature’s capacity to absorb and store carbon, and we can accelerate progress towards sustainable development.”

But, he adds, adequate financial and political support is essential. The report’s authors say that tackling these different challenges involves everyone from governments to the private sector and individual citizens with an emphasis on including Indigenous knowledge.

“Now is the time to turn rage into action,” the UN Secretary-General concludes.

“Every fraction of a degree matters. Every voice can make a difference. And every second counts.”