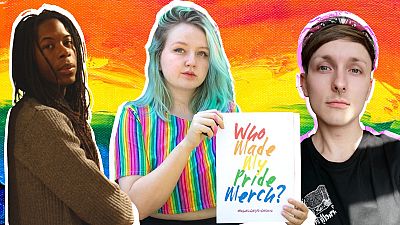 All around the world, Pride events have been cancelled due to the coronavirus pandemic. But there should still be a chance to both celebrate queer culture and continue pushing for positive social change.

A number of studies over the last decade have found that people who identify as queer are significantly more likely to be involved with environmental activism than the rest of the population.

Eric Swank, associate professor of practice at Arizona State University’s New College, US, found in 2018 that lesbians, bisexuals and gay people “were more than twice as likely as heterosexuals to join anti-war, environmental, and anti-corporate movements.” Swank argues that this could reflect the fact that LGB people are “more aware, and less accepting, of social inequalities than heterosexuals.”

To find out more, Euronews Living spoke to four queer environmentalists about how LGBTQIA+ identities intersect with climate justice and animal rights activism.

'Both LGBT rights and environmental stewardship would improve lives'

Konrad Juengling, from Idaho, US, is an LGBT rights and political activist. For him, the two movements are natural companions, "both LGBT rights and environmental stewardship would improve the lives of millions of people."

"When LGBT rights and environmentalism are taken seriously, the world will be a much better place for it,” he says.

Konrad is particularly focused on animal rights activism, launching petitions to outlaw trophy hunting imports and to end the sale of foie gras online. This passion for animals stems from his experiences as a gay man, something he feels has shaped his values and understanding of the world.

“LGBT people have been forced to examine their lives and priorities from an early age,” explains Konrad, “unlike heterosexuals, LGBT people often struggle with acceptance from others and have to make hard decisions about revealing their identities and values. I think examining one’s ethics and morals makes one more apt to being an environmentalist and caring about the Earth.”

For Konrad, there’s still work to be done in order to make sure activism is truly inclusive - and this starts with knowing when to speak, and when to champion others’ voices.

“Know the scope of your experience,” Konrad advises, “I practice not trying to 'whitesplain' issues having to do with communities of colour, or 'mansplain' women's rights. I passionately support communities of colour and women's equality, but I don't pretend to know their struggle and can't speak to it. When asked about an issue I'm not privy to, I try to amplify the voices of those having that experience.”

'The system we live in thrives on inequality and exploitation'

Izzy, based in Cardiff, Wales, has been exploring issues related to sustainability for over four years now on their blog and social media.

They predominantly focus on fashion, promoting sustainable manufacturing and a system which doesn’t exploit workers involved in the supply chain, or cost the earth.

“The system we live in, which created the climate crisis, the one that seems to know only how to make the rich richer and over consume, is also a system that thrives on inequality and exploitation,” explains Izzy, “and that includes the continued oppression and exploitation of LGBTQIA+ people."

They add, "people often like to talk about how the ‘system is broken’ when they see terrible things happen, whether that’s the disproportionate police brutality against black trans women, the amount of plastic currently swimming in our oceans, or slave labour in the fashion industry. But these systems are running just as they were designed to run, and that’s the problem.”

'Pinkwashing', an increasingly popular branding strategy where companies heavily brand themselves for Pride or as LGBT-friendly as a marketing tool, is an area Izzy has also considered closely.

“For this Pride month I also launched my campaign ‘Who made My Pride Merch?’ which is a consumer activism campaign holding brands accountable for the production of their pride merchandise,” they explain. “These brands are making money off of LGBTQIA+ people whilst manufacturing their clothes in countries where it’s illegal to be gay, or where LGBTQ+ people have little to no rights. They’re not showing that they genuinely care for LGBTQIA+ people and so the campaign calls on them to be more transparent and to do more to protect all their workers, especially their LGBTQIA+ workers.”

The intersection between LGBTQIA+ activism and environmentalism, to Izzy, is linked with the marginalisation many queer people experience, “a lot of more privileged people don’t confront [the climate crisis] because they’re living in a bubble protected by the system.”

Like Konrad, Izzy also emphasises the importance of passing the microphone, and ensuring other, unheard voices are given a platform in activist movements. They also suggest diversifying social media feeds to include a broader range of people.

“I have learned so much just by following some accounts and listening to people who have a different experience of the world to me.”

Ayrton, from Nottingham, UK, finds it interesting how many animal rights activists, like himself, are part of the LGBTQIA+ community too.

For him, growing up as a gay child meant he developed a compassion stemming from the sense of ‘other’ he experienced personally.

“My personal view is that growing up as a gay child, it’s common to hear many insults every single day, and of course much worse for some people,” explains Ayrton. “Being on the receiving end of such constant criticism for something you cannot help gives you more compassion to be able to be empathetic to other people. This expands to animals and other causes too. With great compassion, it’s easier to relate to causes and want to help others, whether that’s other people, animals or the environment.”

“Growing up queer inevitably gives you more understanding of groups who are oppressed in similar ways. We want to help and protect others and fight for what is right. Going against the mainstream is the only way to do this.”

Intersectionality is at the heart of Ayrton’s activism and is something he believes to be an essential part of any justice movement. Coined by legal feminist scholar Kimberlé Crenshaw in 1989, intersectionality means looking at how a person’s different political or social identities may combine to create specific forms of disadvantage or privilege.

Leah Thomas wrote in Vogue this month about the need for environmentalism to be intersectional, stating that climate activism also needs to be inherently anti-racist, identifying “the ways in which injustices happening to marginalised communities and the earth are interconnected.”

“Without intersectionality, what are we really fighting for?” asks Ayrton. “We are fighting against oppression itself. It is oppressive behaviours that are at the route of many problems: racism, transphobia, speciesism, etc. If we come together to fight against this oppression we should do it for everyone. As it is said, we are not free until all are free.”

Christopher, an American living in Prague, Czechia, also emphasises the importance of intersectionality in activism.

A post shared by Christopher Sebastian (@the_christopher_sebastian) on Jan 14, 2020 at 5:44am PST

“Queerness is just one part of my identity,” Christopher says, “I’m also Black, and I’m vegan. And for years I’ve really wanted to help people understand that the compartmentalisation of identity by queerness, by race, by species (and more) does us all a great harm.

“The fragmentation of identity and of knowledge itself separates us. Race, sexuality, gender presentation, and animality all share significant overlap with our understanding of environmentalism and the natural world.”

Animal rights activism is Christopher’s primary passion in terms of environmentalism. He feels that though the barriers are being broken down between other liberation movements, and “the fragmentation is starting to dissipate, the importance of solidarity with just one more marginalised group is overlooked: the Animal.”

Christopher argues that, “by educating people that animal liberation is consistent with our own, new opportunities are being created to really effect systemic change.”

When it comes to the intersection between queer rights and environmentalism, Christopher highlights “that the best social science indicated that people who experience marginalisation have greater empathy than people who don’t experience economic and social oppression.

“Ironically, marginalised people around the globe are also the most vulnerable to the effects of environmental harm.”

While their motivations are not homogenous, this might explain why more queer people identify as environmentalists.

“And it’s not just queer people,” stresses Christopher, “people of colour are more environmentally conscious as well. The Washington Post reported in January that the fastest growing demographic going vegan in the United States is Black!”

For Christopher, activism needs to be opening the doors to more marginalised people - not as tokens or “one-dimensional objects added for cosmetic diversity,” but as experts and professionals.

“If you look at your organising body and it’s full of straight white people, start there,” he adds. “Make it browner. Make it queerer.”