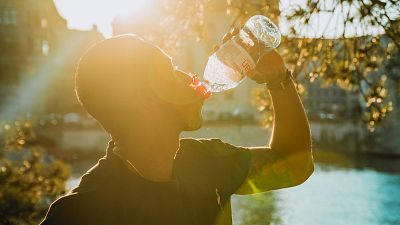 As Europe swelters amid a ferocious heatwave, the human cost is rising. The extreme conditions are causing thousands of heat-related deaths.

Wildfires are forcing many more to flee as the flames threaten to engulf their homes.

Hans Kluge, Europe’s regional chief of the World Health Organisation (WHO), called the heatwave “unprecedented, frightening, and apocalyptic” on Friday.

It is “the overarching crisis of our time that is threatening both individual health and the very existence of humanity,” he added.

Which European countries have been affected by the heatwave?

Extreme temperatures have been baking southern European countries for weeks. In northern Italy, rivers are running dry and agricultural crops have been decimated by a lack of water.

Wildfires in Spain have destroyed vineyards while in France 14,900 people were forced to evacuate from towns last Monday.

The heat has also moved further north with the UK reaching its highest ever temperature in recent history. A high of 40.2 degrees Celsius was recorded at Heathrow in London last Tuesday. Wales reported its hottest temperature on record last Monday of 37.1 degrees Celcius.

Temperatures reached 35.4 degrees Celsius in the southwest of the Netherlands last Monday making it the hottest day of the year so far.

As the heat in Europe builds, wildfires have also been reported as far north as Scandinavia while blazes across London last Tuesday destroyed a total of 41 homes.

“For this to happen, governments need to demonstrate political will and genuine leadership in implementing the global Paris Agreement on climate change, with collaboration replacing division and empty rhetoric.”

What is the death toll of Europe’s heatwave?

“Heatstroke and other serious forms of hyperthermia – an abnormally high body temperature – cause suffering and premature death. Individuals at either end of life’s spectrum – infants and children, and older people – are at particular risk,” he said.

Some 1,700 people have already died due to the heatwave in Spain and Portugal. In the UK, at least four people are reported to have drowned in lakes and reservoirs while trying to cool down.

How can you stay safe in a heatwave?

Kluge also shared some advice on how to protect yourself during a heatwave.

He underscored the importance of keeping the body cool and hydrated.

“Use light and loose-fitting clothing and bed linen, take cool showers or baths, and drink regularly while avoiding alcohol, caffeine and sugary drinks,” he said.

“If necessary and possible, try to spend 2 to 3 hours of the day in a cool place.”

“If you feel dizzy, weak or anxious, or experience intense thirst and headache, move to a cooler place,” he said.

Flames destroy sets at Cinecittà Studios but cause no victims