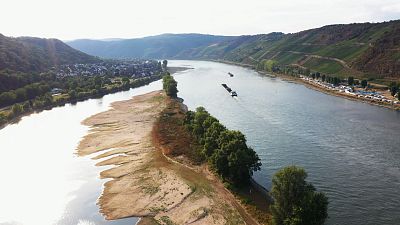 The latest data from the Copernicus Climate Change Service shows that in Europe this August was by far the warmest on record. Temperatures last month were 1.7 degrees Celsius above the 1991-2020 average. That's almost a degree higher than the previous record for August back in another warm year, 2018.

Overall it was a very hot summer in Europe. The European temperature anomalies for this June, July and August combined show an overall warming trend, with the summer of 2022 rising to 1.3 degrees Celsius above average overall.

The same time-frame on a global scale shows a warmer than average summer across many areas of the northern hemisphere, but Pakistan was cooler as it experienced heavy rains leading to devastating floods that claimed 1,400 lives.

We will now take a look at the river Rhine in Germany, where this year's record dry weather left water levels so low that many barges could only carry a quarter of their usual load. The crisis has left the river transport sector rushing to adapt.

Kristan Kahl is the head of sustainability at Contargo.

"I think a lot of people are aware that this is going to increase due to climate change, that we will have variations of high water, low water, high water and low water and that we have to react accordingly."

Barges on the river Rhine continue to carry lighter loads as the water level remains low. Supply chains are severely disrupted and for Arndt Puderbach, the terminal manager of Contargo, it's a frustrating time.

"Water levels are already a concern for us and that's a very unsatisfactory situation because the demand is there, but unfortunately we can't offer the capacity to our customers.

In 2018 we had a similar situation, but much later in the year. We have...been able to make a design change to some vessels so that [they are] able to load a little bit more, even at low water levels. Furthermore, we have further developed and expanded our rail transport and also offer transport by truck in our network of land bridges."

The solution they can offer is what's called a land bridge - transporting goods and raw materials by rail or road for certain segments of their journey up or down the Rhine. Contargo is looking ahead too, by commissioning new electrified vessels that can navigate shallower water.

"Ships that sail on the Rhine, the biggest ones, can carry up to 500 TEU at a time," says Kahl. "With a train, that's 80 to 100. In this respect, ships remain our focus. That was our core business. Of course, we will adapt the ships that we are building so that by default they can also carry more tonnage even with a lower water level.

That is an extremely important point in order to have the ships well utilised when there is little water in the Rhine. And we will continue to operate with that in the future and make our ships fit for the future accordingly."

The Rhine dropped below average early this year because melt-water from the Alps came and went swiftly, due to the warm, dry spring. Scientist Enno Nilson, is Senior Researcher at the Federal Institute Of Hydrology.

"This kind of low water, low precipitation in the spring, high temperatures in the spring resulting in early melting of snow and ice masses. Yes, this, this phenomenon, this concatenation we attribute to climate change. This is something that we expect to happen when temperatures rise, when the climate projections that we work through to the end of the 21st century take into account."

It means that the water at Kaub, one of the shallowest sections, could remain low this autumn, as Enno Nilson explains.

Many adaptation plans are in place, for example the government are set to deepen the shallowest channels, and shipping companies now have sophisticated river forecasts to better manage logistics.

Nevertheless, Nilson still voices concerns over how extreme the situation could become.

"In future climate change conditions we actually expect the low water situation to get worse if we don't engage in climate protection. It can be expressed in terms of intensity - that is, how low could the water level go down to, how little river discharge could we have, how little could the ships take on board? But also in terms of duration - that means we could be stuck in low-water situations for weeks or months, and we have to adapt. How do we react in such situations?”