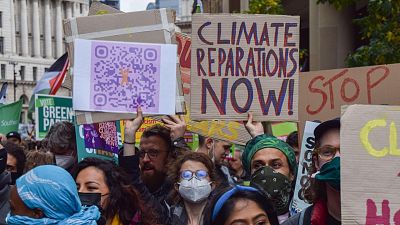 A protester holds a 'Climate Reparations Now' placard during the demonstration in the City of London.   -   Copyright  Vuk Valcic / SOPA Images/Sipa USA
By Rosie Frost  •  Updated: 28/07/2022

Calls for climate reparations are growing around the world as countries in the Global South face the worst impacts of the climate emergency.

The latest IPCC report on adaptation found that around half of the world’s population was extremely vulnerable to climate change. A vast majority of those three and a half billion people live in the Global South.

Many now claim the case for reparations is irrefutable, as those who have contributed least to climate change face its most severe consequences.

So what exactly does that mean for the countries these groups and governments are seeking to hold accountable?

What are climate reparations?

Reparations look to those responsible for harm to repair the damage they have done. This can take many forms, including apologies, compensation, legislative changes and policies to ensure wrongs aren’t repeated.

When it comes to the climate, reparations call for countries to come together and recognise the ways that those with historic high emissions have driven environmental damage. This includes finding ways to rectify these injustices.

What’s the difference between reparations and finance?

The call for climate finance is something that has made headway with UN backed pledges to provide $100 billion (€99 billion) by 2020 - a deadline that has already been missed and extended.

But calls for reparations have been pushed off the agenda, particularly by countries like the US.

“I think finance, in their minds, can be internalised as either an investment or a form of charity. Whereas the idea of reparations, or compensation for loss and damage, kind of implies a sense of liability or possibility,” explains Daniel Willis, campaigns and policy manager at democratic social justice organisation, Global Justice Now.

So it's about thinking, ‘Why is it that the people who have contributed the most to climate change are relatively protected from its impacts?’

Climate reparations take into account “ who’s contributed most to climate change,” he adds.

The Global North is made up of some of the biggest emitters by far. Across the US and Europe, the average person still emits far more carbon than those from countries in the Global South, like Mozambique, Bangladesh or Sudan, says Willis.

“So it's about thinking, ‘Why is it that the people who have contributed the most to climate change are relatively protected from its impacts?’

“In a way, for it to be reparations, for it to actually repair some of the damage, I guess you have to recognise who’s causing the harm in the first place.”

How do you work out how much each country owes?

Figuring out the politics of reparations requires a method for determining the damage one country has done to another through historic emissions.

“The basic question is ‘How will you quantify which nations are culpable for the economic impacts of anthropogenic warming?’” says Dorothy Guerrero, head of policy at Global Justice Now.

How will you quantify which nations are culpable for the economic impacts of anthropogenic warming?

There have been many attempts to do just this. Climate TRACE, a coalition of researchers backed by environmentalist Al Gore, is looking to track emissions in real time. They say it could bring radical transparency to hold big and small polluters accountable.

Most recently, a study from Dartmouth College in the US claimed to calculate the economic impact of top greenhouse gas emitters on individual countries. It was billed as a game-changer for possible legal action.

While recognising the importance of such studies, Guerrero notes complications with their practical application, “I can see the politics of what will be recognised.”

For one, when do you start measuring emissions from? The 1990s, 70s or even as far back as 1750 at the dawn of the Industrial Revolution? The answer is likely to vary depending on who you ask - and what date is most favourable to their country’s responsibility.

And, as Willis adds, estimates usually only cover what is produced within a country’s territory.

“Emissions [historically] generated in the British Empire in India, for example, are all counted under India, not under the UK,” he says.

When countries export the manufacture of essential goods, the greenhouse gases produced often aren’t included either. Neither is shipping or investment in polluting industries like fossil fuels.

“These are the calculations that they don't want to discuss in negotiations,” Guerrero says.

“They don't want to acknowledge that, if you include the percentage of investments, then the UK does not just produce five-to-eight per cent [of global emissions], but double that.”

A legacy of colonialism and climate change

Monetary compensation is not the only goal of reparations: systems need to change too.

According to a recent report from Greenpeace and race equality think tank the Runnymede Trust, the climate emergency is a legacy of colonialism. Despite having contributed the least to the crisis, people of colour are “disproportionately losing their lives and livelihoods” in the millions because of it, says the report.

Guerrero has a story she believes illustrates the problem perfectly.

“Back in 2008, I visited Uttar Pradesh in India and we had this meeting with forest workers. And they said that many of the forests in Uttar Pradesh were cut to provide the wood for the trains in Britain.”

She says that this, to her, was a clear indication of how those in the Global South look at colonialism and climate change. They sacrificed their forests so that people in the UK could benefit.

True reparations include looking at the ways we are still benefiting from exploiting other countries, especially those feeling the effects of climate change. This means acknowledging how colonialism changed the way we trade and our relationships with each other and the natural world.

The problem with Nationally Determined Contributions

Much of what has already been agreed upon relies on what are called Nationally Determined Contributions. They are at the heart of the Paris Agreement and embody each country's efforts to reduce national emissions and adapt to the impacts of climate change.

“Nationally Determined Contributions are what each country is prepared to do, not what they must do,” Guerrero says.

She brings up carbon budgets, the maximum amount of emissions scientists say we can produce to stay within safe temperature thresholds. It amounts to around 50 tonnes per person and in 2021, experts estimated we have just 11 years left if we keep emitting at the rate we are now.

“We’ve used our budget, and then still wanted to dominate the remaining carbon budget,” she adds.

At COP26, calls for a climate loss and damages fund were met with strong resistance from those in the Global North. However, there is hope that progress can be made at COP27 in Egypt this year.

“Good progress at COP27 would be an agreement to establish a fund for loss and damage with some commitments from countries like the US and the UK to contribute to it,” says Willis.

“There’s also a big need for a new deal around climate finance to go beyond the $100 billion target - far beyond.”

It is estimated that somewhere in the region of $400 billion (€395 billion)  will be needed by 2030. But, Willis adds, there needs to be a conversation about how these countries plan to generate that money.

“If it’s just going to be raised off the backs of taxpayers in the US and the UK, that’s not particularly fair either.”

Instead, he believes governments need to focus on taxing fossil fuel corporations and the super rich while closing down tax havens.