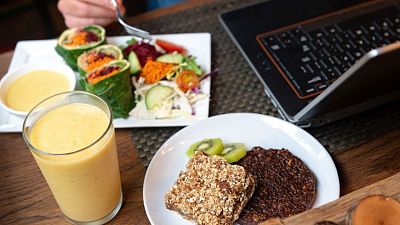 People who follow a vegan diet could be more positive and productive than their meat-eating counterparts, new research reveals.

An investigation commissioned by food delivery service City Pantry found that vegan staples such as dark chocolate, leafy greens and plant-based proteins lead the way as the best foods to consume for boosted brain power and good moods.

From remote workers to city dwellers, over a third of employees are said to feel unmotivated due to poor food choices influenced by their careers.

Some of the main culprits included ultra-processed meats and cheeses, boxed cereals, crisps and sugary treats with a high glycemic index like sweets and fizzy drinks.

How food affects our focus

Part of our brain’s relationship with producing energy from the food we eat lies in how inflammatory that meal or snack is.

Plant-based foods are commonly associated with having lower levels of inflammation that allow our brain to spend less energy keeping us on the go.

Plant-based foods are commonly associated with having lower levels of inflammation that allow our brain to spend less energy keeping us on the go.

“When inflammation is present in the body, less energy is available to the brain, so it’s important to eat anti-inflammatory foods to ensure workers wake up in a good mood and stay energised and focused through the entire morning.”

What are polyphenols and why are they important?

Dr. Naidoo has worked extensively producing literature for people that want to better understand the links between their food consumption and mental capacity.

Why? Because they are polyphenol-rich, which acts as a key tool for keeping your body and mind ticking over through stabilising insulin, regulating your gut microbiome and more.

Making vegan-inspired meal choices during a work day doesn’t have to mean going on a total health kick. In fact, Dr. Naidoo recommends foods with natural fats such as nuts, avocados, and extra virgin olive oil as a source of further boosted focus for undertaking lengthy tasks.

“Fat is a key component for mental health. Your brain is made up of 60 per cent fat and in order to perform at its best, it requires a constant supply of omega-3-fatty acids.”

The powers of going plant-based

An increase in productivity is just the tip of the iceberg of incentives for people to go plant-based.

If the global population went vegan its food-related emissions would drop 70 per cent by 2050, according The University of Oxford.

“A vegan diet is probably the single biggest way to reduce your impact on planet Earth, not just greenhouse gases, but global acidification, eutrophication, land use and water use,” says lead author Joseph Poore.

Plant-based diets now regularly feature in challenges for people wanting to test their productivity limits. It is now popularised across a host of viral internet challenges.

As well as the given environmental benefits, a growing number of health bodies endorse veganism as a pathway to a healthier lifestyle providing the person keeps their protein intake high and not lean too heavily on vegan “junk food”.

Studies like the one undertaken by City Pantry are more widely available than ever, but one of the first to establish a relationship between veganism and productivity came from a group of researchers at The George Washington University School of Medicine, over 10 years ago.

They implemented a vegan workplace diet and found it to successfully improve “health-related quality of life and work productivity”. The only drawback participants cited was a lack of choice when it came to eating out, but this was offset by a 40-46 per cent decrease in work-related health impairments.