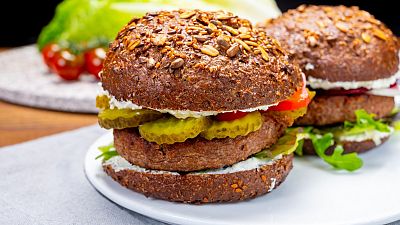 The rapid growth of plant-based meat alternatives will mean Europe will reach “peak meat” by 2035, according to a new report.

Published by Boston Consulting Group (BCG) and Blue Horizon Corporation, the Food for Thought study suggests that meat consumption will be in decline by 2035 in Europe, as protein alternatives reach parity on price and quality.

In comparison, about 13 million metric tons of protein alternatives were consumed globally last year, just 2 per cent of the market.

The report forecasts that plant-based proteins will capture 11 per cent of the meat, seafood and dairy market by 2035, rising to 97 million metric tons.

The decline of meat consumption will remove as much carbon dioxide emissions from the atmosphere as Japan emits in a year.

But with a concerted effort by regulators, plus tech innovations to make cheaper, better quality products, this could be as high as 22 per cent in the next decade.

The environmental benefits of going vegan

With the growth of veganism all around the world, an increasing number of people have already made the switch to plant-based alternatives.

Research carried out in 2020 by German plant-based supermarket chain Veganz found that the number of vegans in Germany alone had doubled in four years from 1.3 million to 2.6 million, or 3.2 per cent of the population.

As well as Germany, the study also surveyed consumer habits in six European countries including Austria, Portugal and France. On average, around a third in those three countries identified as "flexitarians" having made the decision to eat less meat.

According to the BCG report, the decline of meat consumption will remove as much carbon dioxide emissions from the atmosphere as Japan emits in a year, and save enough water to supply the City of London for 40 years.

Reacting to the report findings, Tod Bradbury, Campaign Manager at animal rights charity Animal Aid, said: "The Food for Thought report makes for very positive reading. It should come as no surprise there will be a time in the near future where meat consumption will decline to such a point in which plant-proteins make up a significant part of global protein consumption.

"The production of plant-based proteins and foods requires fewer resources and produces far fewer greenhouse gas emissions than meat and dairy products - and of course they do not require the unnecessary slaughter and exploitation of animals.

"With this in mind, it is absolutely necessary that everybody reduces their animal product consumption, whether significantly or by adopting a plant-based diet," he concludes.

Why might veganism be more popular with women than men?