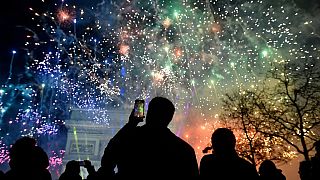 So here we are at the end of January. Has been dry for you? Or are you counting down the hours to wet your whistle?

And while we're talking about maintaining one's resolve, have you ever succeeded at keeping resolutions you made during the New Year? I personally haven’t.

While I always finish the year highly motivated about becoming a better versions of myself from January 1st, my drive and desire levels usually fade away before spring.

So what can we actually do to remain committed to the ‘new year, new me’ motto?

Quite a lot according to Paul Dolan, a behavioural scientist, who says it's very common practice for people to make promises to themselves that they can't keep.

He told Euronews Culture that it generally takes about two months to embed a new routine in our lives, “but most New Year resolutions are long gone before the end of February!”

But fear not because hope springs eternal! Here's our handy but not exhaustive guide to what you can do to make a difference.

Do it for yourself

The very first thing to do is identify what you actually want to change about yourself. Whether it’s reading more, going to the gym more often or taking up journaling, you need to be true to yourself.

For instance, don’t commit to reading one book a week if reading isn’t actually your thing, because you’re setting yourself up for failure.

Do not formulate resolutions because of some sort of pressure, like what your relatives want for you, or what you think society tells you is good for you.

We look at the benefits of setting goals, but often don’t look at the downside of when they’re not achieved, which can have a pretty negative impact on our wellbeing.

“You need to make things easy for yourself by implementing a plan to get into a routine”, says Dolan. With only a small tongue in cheek, he explains that our brains are lazy, and creating easy routines at first is the best way to make them long-term habits.

Let’s say your goal for 2023 is to be able to run a semi-marathon. For obvious reasons you’re not going to be able to run 21km straight away. However, by setting realistic goals, like going for 20-minute runs at first, and slowly increasing, you are more likely to succeed. Plus, actually witnessing the progress you make is rewarding, instead of being miserable when realizing you’re out of shape if you go for a semi-marathon as soon as your holidays hangover disappears.

Don’t be too hard on yourself

Dolan says committing 100% to a new habit from the start is close to impossible. We’re more likely to succeed by allowing ourselves to take baby steps, especially if our resolution concerns something we are not used to doing often. Think of every time you did something for the first time: it is rare to thrive immediately. With time and patience, getting there eventually is doable.

Popular resolutions and how to keep them

A popular new year resolution is, of course, to abstain from drinking alcohol through the first month of the year, especially to get healthy again after over-indulgent festive celebrations.

Managing your expectations is Dolan’s advice for Dry January: “If you set yourself up for a completely dry month, and you have one drink on the 7th of January, you'll tell yourself ‘that's it, it's over, might as well drink every day!’ Whereas if you set a more manageable expectation of having the odd drink here and there, then your drink on the 7th won't change your goal.”

By being mindful of a bad habit you want to diminish instead of cutting it out completely, your goal will be more attainable and you might make it past the first month of the year.

Like Dry January, Veganuary is a concept that uses our goodwill to make positive changes around the new year to try to convince us to go vegan.

Toni Vernelli, is head of communications at the homonymous non-profit organisation. Since 2014, it has been  encouraging people to try veganism for a month. Based on their most recent data, after a month 82% of those who signed up say they kept on reducing the portion of animal-based products in their diets, among which 30% are now vegan.

Vernelli attributes this success to Veganuary's golden rule: ‘don’t let perfection be the enemy of the good’. Echoing Paul Dolan, she describes the recommendations that made Veganuary a recipe for success.

Step 1: Be prepared. Stock up on a few basic vegan ingredients before starting, like margarine, or you’re setting yourself up for failure on day one.

Step 2: Make small changes: “don't suddenly go from eating lasagne to having kale and quinoa salad. Do a lasagne, but make it with soy-based mince, or lentil instead of beef mince, and swap up cow milk for plant milk. Make the dishes that you're used to making, but veganise them.”

Step 3: explore and experiment with new recipes once you’re at ease.

Proportionally speaking, Veganuary is still taking baby steps into our kitchens, as less than a third of those who tried remain vegan once the month is over. But according to Vernelli, having just one plant-based meal a day makes an enormous difference to our bodies, animals and the environment.

Knowing that may help you keep up your new year resolutions. Whatever happens, give it your best, and remember that even a small change is a step in the right direction.

Should you try Dry January? Why a break from alcohol benefits women's health