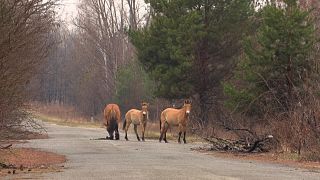 In the absence of humans, the region around Chernobyl is being reclaimed by nature.

35 years ago a total of 350,000 people were evacuated from the territory after one of humanity's worst nuclear disasters.

Ukrainian authorities say the area may not be fit for humans for another 24,000 years. Today, however, it serves as one of the most unlikely nature reserves. Among the Chernobyl exclusion zone, endangered animals thrive, including the stunning Przewalski’s horses.

For many decades they were considered the last truly wild horse in the world. In the 1970s they were almost rendered extinct in the wild, but a captive breeding program managed to rescue the species from extinction.

Today, several hundred live in the wild in the steppes of Asia and in Europe, but there's also a steadily growing population - to the surprise of many - in Chernobyl.

Click on the video above to learn more about this unique nature reserve.