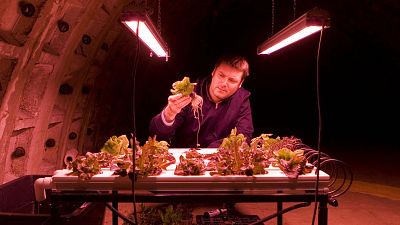 Since 2015, Growing Underground has adopted one of eight underground World War Two bomb shelters to grow plentiful, pesticide-free produce. The farming happens entirely indoors, away all from traditional means of harvesting greens.

The project burst into the fresh produce market as the “world’s first subterranean farm” and hasn’t looked back since.

Entrepreneurs Richard Ballard and Steven Dring saw a valuable opportunity to bolster the city’s green economy and make use of the otherwise abandoned tunnelling 10 stories below ground level.

The energy used to farm these foods is 100 per cent renewable. Customers can look forward to supplies of greens such as watercress and micro rocket, as well as herbs like Thai basil and garlic chives.

Ballard was able to make his dream a reality using climate controlled elements such as LED heating and recycled water. Growing Underground’s inner workings are a real vision - rows and rows of greens, stabilised beneath a purple hue. As of 2019 it’s been possible to tour the unique growing space, exploring the eight 91-metre-long tunnels.

The plant environment is completely soil-free. Instead, the microgreens are grown from recycled carpet. Its sturdiness and minimal composition rate provides the perfect environment for the plants to grow, aided by 18 hours of LED lighting and automated feeding each day.

Pre-pandemic, the business was profitable enough to house nine full-time staff. It’s no wonder - urban farming is set to be one of the fastest expanding sectors as waves of climate jobs become essential to the future of our economy.

The impact of the initiative is something to behold - it has retail partnerships with supermarket giant M&S and premium store Whole Foods, as well as supplying Michelin starred restaurants with their microgreen salads.

Indoor farms are a vital solution to a growing produce problem

Last year Forbes reported that in order to align with vast population increases over the coming decades, food production needs to rise by 70 per cent in the next 30 years.

Indoor farming has been cited by many global bodies as one of the most achievable solutions to combat this.

Growing Underground’s climate-controlled hydroponic technology guarantees a yield of 60 harvests a year. Traditional farming is subject to environmental and supply-related issues that a controlled environment can mitigate. A good year would yield less than 10 of the same harvests.

Indoor farming removes the need for deforestation in creating flexible spaces like this.

There are a host of other environmental benefits too. Herbs like coriander are traditionally sourced from warmer climates like Morocco, saving airmiles for the supermarkets that use produce made closer to home.

By sticking to the local area, customers are also guaranteed a longer lifespan for their fresh goods.

The farm is now looking for a second round of funding to open a companion supplier further in the suburbs.

"I can imagine sites like this in every major urban centre," says operations manager Alex Hamilton-Jones.