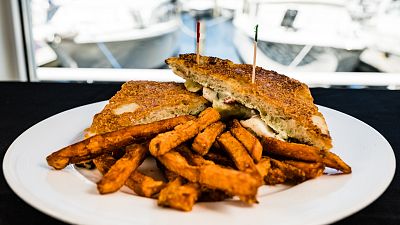 Next time you go on your weekly food shop, imagine packing three full bags of groceries and then immediately binning one of them as you leave the store.

Symbolic, yes, but illustrative of society’s problem with food waste, which accounts for $1 trillion of tax payers' money every year (€852,655,000). That's a third of all grown and produced food.

In the first 10 months of 2018 alone, $125 million was raised by companies fighting food waste. But it's not just up to the corporate world, we can all do our bit too. A simple change to your daily routine, like downloading an app, can make a meaningful difference and cut your carbon footprint.

So what are the best apps for rescuing wasted food?

Too Good to Go

Too Good to Go is an innovative platform which makes excess food from restaurants and shops available to users looking for a meal deal - at a discounted price. The "community of waste warriors" using the app is now over 26 million and spreads across 14 countries in Europe.

As of this week, Too Good to Go is also live in the US, in New York and Boston.

The app's partner restaurants and vendors list their unsold food at the end of each shift (morning, lunch, dinner) often at over 50 per cent off. Rather than specifying each leftover item, the surplus food is simply packaged as a ‘Magic Bag’ - ready to be ‘saved’, rather than binned. Users can browse venues based on name, time and location, paying in-app for their meal.

Contents of the mystery ‘Magic Bag’ are revealed upon collection in store, a selection of excess but perfectly good food that would have otherwise been wasted.

"We’re building a global movement and our mission is to inspire everyone to take action against food waste," says the app’s marketing manager, Anoushka Grover. Too Good to Go has been downloaded over 8.3 million times and has saved over 47 million meals since its launch in 2016.

**Karma**’s mission is similar, to fight food waste by ‘rescuing’ the over-produced food by cafes, restaurants and grocery stores. How? The app connects vendors to hungry customers on the lookout for a bargain, using AI, and has already saved 295 tonnes of food since its launch in 2016.

Food operators list surplus meals and unsold items on Karma at half price - which then become available to Karma’s 500k+ users to discover. The app alerts users to the closest deals in proximity to their location.

It’s a way for restaurants and cafes to earn additional revenue, be promoted to new customers and save on wasted meal costs while making a real impact on the environment. The Swedish start-up has helped save over 442 tonnes of CO2. Available in London, Paris and 150 cities in Sweden.

OLIO has started a food sharing revolution in society’s core, the local community. The app connects neighbours with one another, and nearby shops/cafes with volunteers, so that excess food is shared and picked up for free.

Co-founder Saasha Celestial-One admits her parents "installed a sense of eco-consciousness" in her from a very early age. "Growing up in a modest background, my mum was very resourceful, nothing went to waste," she says. It’s a trait she’s passing onto her 6-year-old son, who is also one of the 100k active OLIO users every month. "He’d often help me upload surplus food items on the app, a way to earn pocket money, while saving the environment!".

You can record the products easily, either by manually inputting them through the built-in app library or by scanning their barcodes via the phone’s camera. With NoWaste, you can create dynamic shopping lists which reflect current existing food inventories and alert you to products that may need to be thrown away soon.

The app encourages a greener lifestyle and saves money too! In the UK alone, around £4.4 million tonnes of edible food is thrown away by households each year.