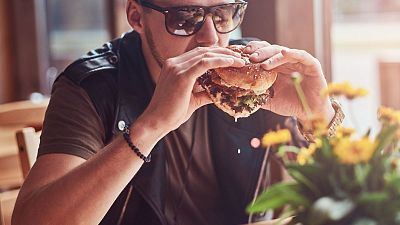 This year saw a record number of people signing up to Veganuary. With growing anxiety about the impact of animal agriculture on the environment and evidence that a plant-based diet can be beneficial to our health, the number of vegans has doubled across Europe and the US.

This year, the "urgent need" to reduce our intake of meat, dairy and eggs has received more coverage than ever as experts have pointed to farmed animals as a possible origin for COVID-19.

From eco anxiety to concerns around animal cruelty, it's clear many more people are turning to veganism as a way of life. One factor, however, seems to significantly increase our chances of abandoning animal products altogether. That factor is being a woman.

In the UK in 2016, the Vegan Society found that twice as many women as men were vegan. It’s not just the UK though, with statistics showing an incredible 79 per cent of vegans in the US identify as female.

Perhaps this isn’t a surprise to some as animal rights and feminism have long gone hand in hand. Activists in the past saw the refusal to eat meat as a form of rebellion against the patriarchal status quo.

There are other aspects of gender politics at play too. In a culture where media around dieting is distinctly gendered and which categorises meat as a 'male' food choice, there is an increased amount of pressure on women to change the way they eat. Those that don't often feel guilt for eating the 'wrong' things or 'too much'.

Whether or not you subscribe to this way of thinking, the figures suggest something must be going on. So why do fewer men choose to adopt a plant-based diet?

Meat and gender are thought to have been linked since the beginning of time. Hunting was important to early humans with food gathering tasks split into gendered roles.

Men went out to kill large game animals while women typically ate smaller portions of meat and collected plant foods. For our close relatives, the chimpanzees, the more successful a male is at hunting, the better his social status. This may have also been true for our hunter-gather ancestors where studies have controversially suggested eating meat could have meant a bigger brain.

Men in most western societies today aren’t likely to be out tackling game to feed their families, but they are still more likely to associate meat with ideas of health and strength. A 2018 study found that concepts like “virility” and “power” were a part of the relationship we as a species have with eating meat and conventional masculine stereotypes.

If millennia of social conditioning causes us to associate meat and masculinity, it’s perhaps inevitable that men who go vegan can be discouraged by a negative reaction from those around them.

Lecturer in Human Geography at Newcastle University, Dr Michael J Richardson, is currently researching the link between meat and masculinities. He says that the way people react to this apparent challenge to masculinity can vary.

“It really depends on who you speak with regarding which defence mechanism they'll draw upon - as in young men who already consider themselves as fit, gym goers and into health and fitness tend to defend their meat heavy diets more adamantly.”

Richardson is publishing a book on the topic later this year entitled Redefining Masculinity: feminism, family and food, but it was reactions from people he knew that piqued his initial curiosity. When he first made changes to his diet over three years ago, he saw some of these defensive responses from his friends.

“My experience, as a sport-loving, football playing, fit, young, heterosexual white man was entirely expected within the friendship group,” he explains. “Like any other challenge to the structures of hegemonic masculinities, once 'outed' as vegan, the immediate accusations of weakness and homosexuality come to the fore.”

Insults like “soy boy”- defined by urban dictionary as a phrase to describe “males who completely and utterly lack all necessary masculine qualities”, show how this attitude easily pervades popular culture. Widespread a few years ago on sites like Twitter and Reddit, the term gained traction with far-right commenters seeking to distance themselves from anything deemed “feminine” or “weak”.

Breaking the stigma around a plant-based diet

Even if men are interested in eating less meat, without acceptance it can still be a difficult choice, a recent study from the University of Southampton shows. The more men that take the leap, the easier it gets, researcher Dr Emma Roe told a conference when the paper was presented.

“What we have discovered is that many men are interested in eating less meat, they just need social permission to do so – and as more men make vegetarian and vegan choices, that permission is becoming more readily available,” she explains. Eating meatless meals together in a group removed pressured and ‘normalised’ plant-based choices for the men who took part in the study.

“I do think that the different routes into veganism matter however and can provoke very different responses,” adds Richardson. Documentaries like Game Changers are beginning to change the tune as gym-goers and health enthusiasts are particularly receptive to these newer vegan insights, he says.

“What's important to note about veganism is that the health and fitness angle is only one prong of a trident approach. The other two, of environmentalism and animal rights, carry different weight within these discussions.”

Mark Hibbitts, an ex-commercial fisherman and copywriter, was one of those men who changed their way of thinking about vegan diets.

“About 7 years ago my long-term veggie wife decided to go vegan, and I wasn’t happy about it,” says Hibbitts. “After a while, I decided to do my own research so I could find a way to talk her out of this ‘silly phase’.”

But, in doing his own research, Hibbitts managed to do the opposite and eventually ended up convincing himself to join his wife in her newfound veganism. “Instead I discovered animal agriculture – an industry so cruel and environmentally damaging that even I couldn’t support it any more.”

At first, he found that friends resorted to the usual “bacon jokes” but Hibbitts has used his own experience to help change a few minds. “All in all people understand why I’m doing this and ask for advice on cutting meat and dairy from their diet,” he says. “So many people have chosen to either reduce their intake of animal products or go completely vegan since speaking with me.”

Unravelling this mystery is an important task if we are to meet environmental targets for a reduction in meat-eating set by organisations like the IPCC. Those like Mark Hibbitts who choose to take the leap despite the backlash could help to encourage a sense of social approval that would start to balance out the vegan population.

But it's also important to consider too that dietary choices are complex and wrapped up in far more than just gendered stereotypes. Culture, community, family and health can also play a role and choices about what we eat are intensely personal.

If there's one thing that considering meat and masculinities shows, however, it's that empowering, educating and supporting people to make decisions allows them to make the best dietary choices for themselves, regardless of societal pressures.

'Peak meat': Plant-based alternatives will take over Europe by 2035