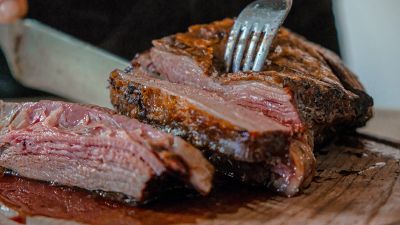 A group of health professionals in the UK are urging the government to consider a carbon tax and carbon food labels on meat by 2025 to protect both public health and the planet.

Food production and consumption accounts for more than a quarter of total global emissions according to the UK Alliance on Health and Climate Change (UKAHCC).

“Most activity to limit climate change has focused on decarbonising energy and transportation,” says Professor Dame Parveen Kumar, Ambassador of the UKAHCC. “This is very important, but we mustn’t overlook the potential to mitigate the dangerous health effects of climate change by rethinking our approach to food.”

We mustn’t overlook the potential to mitigate the dangerous health effects of climate change by rethinking our approach to food.

The UKAHCC said in a new report on Wednesday that economic incentives have been most effective in curbing consumer habits in the past. It’s estimated by the UK Treasury that 50 per-cent of manufacturers adjusted their recipes after the so-called ‘sugar tax’ was introduced in 2014.

Towards a more climate-friendly diet

Whilst meat is an important source of vitamins and protein, we’re all being urged to cut down on the amount we consume.

Growing livestock for consumption (including land usage and feeding the livestock) contributes towards more than half of global greenhouse gasses from food production. In comparison, just 29 per-cent of those emissions come from crop production for human consumption.

However, it’s disputed how much we need to cut down in order to reach net-zero emissions.

On the one hand, the UK government’s Climate Change Committee suggests we need to cut our beef, lamb and dairy production by 20 per cent to achieve net-zero emissions by 2050. But the Eating Better alliance suggests that we need to consume even less meat within a shorter time span: 50 per cent less by 2030.

The UKAHCC said there’s evidence to suggest that switching from intensive farming to organic farming could have a less severe impact on the environment.

Across Europe, doing this could reduce agriculture-related greenhouse gasses by 40-47 per cent and the pasture would help to soak up carbon. However, the report warns this measure alone wouldn’t be enough to achieve net-zero emissions by 2030.

In addition to driving change by meat producers and suppliers, Kumar added that public attitudes towards meat consumption must also change, with healthcare providers leading the way.

“To achieve this, health professionals must be supported to share, and direct their patients to, clear and accessible advice on transitioning to a more climate-friendly diet.”

Would you support carbon food labels?

Two-thirds of consumers, in a survey cited in the UKAHCC report, would support the decision to put mandatory labels on food products to show how big the carbon footprint is. This could be similar to the existing traffic light system for the amount of sugar and salt in foods.

It’s thought that it would make us all more conscious consumers and go hand in hand with a carbon tax imposed on producers.