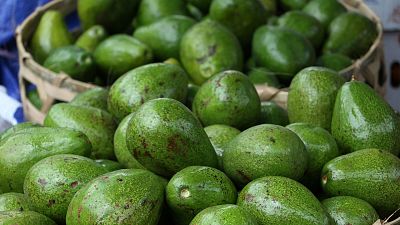 The scaly green fruit has been a source of much environmental controversy in recent years.   -   Copyright  Getty via Canva
By Euronews Living  •  Updated: 26/03/2021

A guerrilla advertising campaign handed out organic avocados in front of the Dutch parliament building last week to highlight the environmental impact of this popular fruit.

“It is generally known that the explosive increase in avocado consumption is causing water shortages in the countries of origin,” says the Dutch organics specialist behind the campaign, Eosta.

In Europe, France and the UK buy the most avocados overall, with Scandinavian countries consuming the most per person. For most of this fruit, imported into Europe from countries such as Colombia, Kenya and Peru, Netherlands is the first port of call.

Our appetite for avocados meant that in 2019, the country was the world’s second-largest importer.

The environmental impact of the intensive avocado production needed to fuel our growing appetite has been well documented over the last few years. It means this ‘green gold’ has become a controversial foodstuff.

Eosta argues that moving away from more traditional growing methods can help reduce water consumption. They want more companies to be transparent about the environmental impact of the fruit and vegetables they sell.

Having sold nearly 3.5 million kilos of organic avocados last year, they claim to have saved 126 Olympic-sized swimming pools worth of drinking water and nearly 300 tonnes of CO2 emissions compared to traditional growers.

Why are avocados so controversial?

Concerns about the planetary impact of avocados have been a topic of debate since the fruit first became trendy. So how can growing them organically help?

Like some other popular foodstuffs including bananas, avocados are often grown as a monoculture. This means a lot of the same crops are planted in an area without much biodiversity. It can make them particularly susceptible to pests or disease and increase the amount of pesticides needed to protect the crop.

When there are heavy rains, the runoff from these chemicals has the potential to pollute the natural environment surrounding the crops. They can also be harmful to the pollinators we rely on to produce fruit and vegetables.

Organic growers refrain from using harmful agrochemicals like pesticides or fertilisers that can have a negative impact on the environment and emit CO2.

Eosta also says that their soils also contain more organic carbon, allowing them to act like a sponge and retain water. The company claims this means they can save up to 40 per cent more water compared to traditional growing methods.