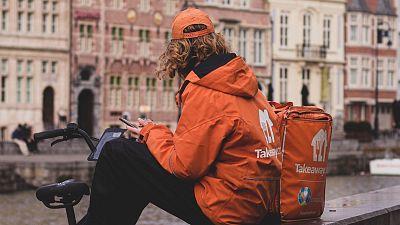 You might be surprised by the carbon footprint of your Friday night takeaway.   -   Copyright  Unsplash
By Shannon McDonagh  •  Updated: 12/03/2021

A study has found that the carbon footprint of households spending €50 a week on food takeaways is up to 450 per cent higher than those that don’t.

It may sound like a steep spend, but the COVID-induced surge in deliveries across Europe means groups of housemates and family members would only have to indulge once a week to reach this figure.

Energy comparison site, USwitch commissioned the research to find out just how much energy is used by food delivery platforms as they become an ever more undeniable convenience.

“While the likes of Deliveroo, UberEats, and Just Eat might be convenient, the price you’ll be paying is more than just financial,” the study says.

They found that online order service, Just Eat is responsible for the highest impact as 1.16kg of CO2 is produced every time a customer visits their website. The lowest impact comes from Deliveroo, where 0.45kg is produced with each click.

The report also reveals that other environmentally friendly behaviours such as recycling and reduced car usage do not make up for this impact in the way people might expect.

Switching to a plant-based diet was consistently the most effective change to your food ordering habits, reducing your carbon footprint by up to 70 per cent.

Takeaways have a host of environmental impacts

Food delivery apps first properly took off in the UK throughout mid-2010’s and quickly expanded across Europe.

There are no doubts COVID has transformed our eating habits in a less environmentally conscious direction and Europe’s key players in the takeaway delivery market all have some part to play.

Just Eat reported a surge of 400 per cent in total orders at the end of 2020 and has doubled the number of restaurants users can choose from.

Spanish startup Glovo came relatively late to the game and struck a €100 million deal in January. Its success was largely rooted in ‘dark stores’ - restaurants with no fixed dining experience that only offer food to takeaway.

Leading German company Delivery Hero reported revenues of over €1 billion annually after acquisitions of a number of smaller competitors from a number of countries.

These developments could have staggering implications on food wastage, excess packaging, and vehicle emissions.

How to cut the carbon footprint of food deliveries

Prof. Robert Crawford at the University of Melbourne stresses that “crucial” evolutions are required from third-party delivery apps. He says they need to start offering their users better environmental choices when it comes to issues like too much packaging.

Changes are already being made and apps that have dominated in the UK,  such as UberEats have started offering the option to opt-out of excessive packaging such as plastic cutlery. Regarded as a mark of progress at the time, critics believe it fails to address the real problem.

Just Eat appears to have a better hold on offsetting emissions created by transportation. The company is facilitating the use of electric scooters and green energy for 28,500 independent restaurants within their network. Drivers can receive a discount of 45 per cent should they wish to operate using an electric vehicle.

There is still a long way to go where the functionality of these services are concerned, should their growth continue post-COVID.

A project from the Yale University School of Environment proposes that solutions can be found akin to USwitch’s push for vegan eating.

A framework was developed based on research that found more than half of users wanted to engage further with the environmental impact of their food. They say “third-party food delivery apps offer a valuable opportunity to connect consumers to the knowledge they need to adopt a climate-friendly diet”.

The framework recommends that customers are given environmental impact ratings on their choices in order to make better decisions.

“Many consumers recognize that animal products have some negative impact on the planet, yet most don’t truly know the extent to which meat consumption can drastically increase carbon emissions”, those behind the project say.

“If food delivery apps implemented these various features, tracking the environmental impact would be relatively straightforward because it relies on digital technology and data collection.”

The researchers believe that providing this information is the key to influencing consumer behaviour and so encourage food producers to reduce the carbon footprint of their offerings.

The 8 ethical chocolate brands to buy for guilt-free gorging

Are ocean plastic credit cards the future of green spending?