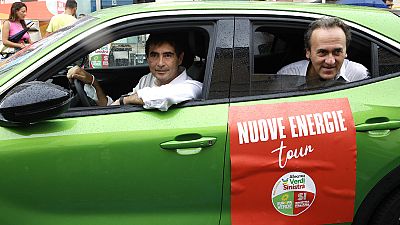 Presentation of the electoral lists of the Green Alliance and the Italian Left in Rome   -   Copyright  IPA/Piero Tenagli   -
By Giulia Grimaldi  •  Updated: 12/09/2022

Drought, the energy crisis and expensive bills have finally stirred Italian public opinion on the climate crisis. As the elections approach on 25 September will this change the expectations of voters?

ECCO, an independent Italian think tank dedicated to the energy transition, analysed lists of policies filed by all of the Italian parties running in the election.

The study reveals that, although the climate crisis has become a central issue for the first time in this election campaign, the practical responses of each party are incomplete to say the least.

What are the greenest Italian political parties?

As expected, the Green Party is the most committed to the environment and its coalition with Sinistra Italiana brings it to the top of the list for a more sustainable Italy.

Left leaning parties are far more active on climate change issues with their ambition on bringing the country to meet international standards, proposals of better laws and public investment for green energy.

Right leaning parties are promising energy cost reductions and support nuclear energy, but their policies lack details. The coalition guided by Giorgia Meloni, the Italian far-right politician on track to win, ranks last in the study, with a single high score on environmental denial.

Italians need a political response for the environment

A previous study from ECCO found that Italians have developed a new awareness of environmental issues. Of the people surveyed, 35 per cent thought that solutions need to be immediately implemented and 13 per cent thought it was already too late to avoid catastrophe.

This makes the green transition more than just an electoral opportunity to tackle uncertainty linked to the fear of gas prices rising in the impending winter. It is also the key to achieving the 2050 climate goals and regaining the confidence of the electorate.

What are the Italian political parties' climate policies?

For the first time, climate change and energy solutions form one of the main battlefields of the election campaign.

Headlines are focused on threats to the economy, but what do we really find within the parties’ programs?

Although in most European countries, a national target for reducing emissions by 2030 is already in place, almost no party in Italy is directly addressing the issue.

Only the Green party and the centre party Azione have goals listed as part of their campaign. The others back the European target of 55 per cent reduction in emissions by 2030. Only the Verdi-SI are proposing bringing forward the carbon neutrality target set for 2050 to 2045, as has already been done in Germany.

Energy is the biggest issue of the electoral campaign and all the parties have much to say about it. Everyone agrees on the need to contain energy costs - a fundamental issue for Italians and the rest of Europe.

Centre and Right coalitions are focusing on nuclear power, while Centre-Left and the 5 Star Movement are looking to energy efficiency and renewable energy instead.

Gas is another dividing theme: PD and + Europa are in favour of new infrastructure, while the Green party supports the need for full use of the existing infrastructure before committing to new plants.

While there is general support for renewables, only the Green party and PD actually propose clear quantitative targets. In general, the Centre-Right believes gas and nuclear power are needed for the transition. It doesn’t, however, clarify how the timing and costs or how these choices can help with the current price crisis while reaching climate targets.

The Centre-Left tends to identify efficiency and renewable energies as a structural response to urgent needs - the same as wider European policies.

Considering the damage caused in the last year by disasters such as floods and droughts, you'd think adaptation policies would be a priority for the parties. On the contrary, the issue is still missing from most political proposals.

The only hints are from Forza Italia, which promises to "plant a million trees". The Green party and M5S speak of public water management. Other parties mention a plan to limit water dispersion.

Verdi-SI are the only ones to mention the plastic tax, whose introduction in Italy has been postponed year after year. Being the second biggest plastic consumer in Europe, Italy is paying the EU €800 million a year as part of the ​​Next Generation EU scheme, without having a national tax on the matter.

Waste management through waste-to-energy plants is another strong point of division. Its supporters are Lega, FdI, FI, and Azione-Italia Viva, while the opponents are M5S, PD, SI-Verdi.

All of the political parties agree on the importance of electric cars. There are different takes on publictransport, however. The M5S wants to introduce a different and more equal form of ticketing, the PD is proposing discounts for young and old people and the Greens party supports a 10-category system of ticketing and 10 months of free transportation. The rest of the parties refer to a more generic support without going into the details.

One of the first tasks of the new government will be to definitively implement the investments of the National Recovery and Resilience Plan (PNRR), the EU temporary recovery instrument to help Member States implement reforms and investments that are in line with the EU’s policies.

However, the fronts are divided when it comes to environmental tax reform. Here the position of the Lega stands out, proposing to maintain subsidies for fossil fuels, while the M5S wants to convert them to a new more efficient use and Verdi-SI their abolition.

EU green policies have also emerged as a point of contention for many of the political parties running in the Italian election.

The centre-right coalition envisages a significant change in Italy's position in European negotiations in order to review goals on climate and energy, but it doesn't indicate what and how.

The centre-left and M5S agree with the European objectives of the Fit for 55 package and the Green Deal. The Third Pole and + Europa do not explicitly mention the topic.

The only ones with an ambition that exceeds European intentions are Verdi-SI. The party is in favour of an increase in the 2030 targets of 55 per cent of renewables and 45 percent of savings through energy efficiency.

On the foreign affairs front, there is also a split in the search for non-Russian gas. The PD proposes the development of a green economy in the Mediterranean, with new partnerships focused on renewable energy and new models of industrial and agricultural development.

With the same spirit, Verdi-SI, proposes that gas contracts should be limited in time. The Third Pole and centre-right aim to make Italy a European energy and gas hub by expanding the countries from which Italy imports hydrocarbons.