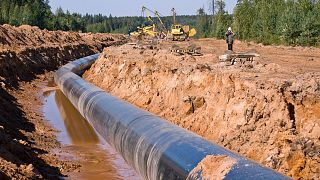 Italy's foreign minister is visiting Algeria with its top energy CEO to discuss cooperation in light of the Ukraine crisis, the ministry said on Monday.

The move comes as Western governments step up efforts to tap alternative gas supplies to reduce their reliance on Russia after its invasion of Ukraine.

Natural gas is regarded as the cleanest fossil fuel - but it's not a replacement for renewable energy sources like wind and solar, as it still emits a large amount of methane.

The foreign office announced that minister Luigi Di Maio was travelling to Algeria with Eni Chief Executive Claudio Descalzi and a representative of the energy transition ministry.

Eni has a series of long-term gas contracts with Algerian gas monopolist Sonatrach and is one of the country's biggest foreign energy producers.

It also has strategic take-or-pay gas contracts with Russia's Gazprom.

How much gas does Italy import from Russia?

Italy, which generates around 40 per cent of its electricity from gas, imports more than 90 per cent of overall gas consumption - with most of that coming from Russia and Algeria.

Rome, which has introduced measures to boost domestic gas production and storage, is looking to diversify its gas supplies to reduce its dependency on Russia.

But with global gas supplies tight and liquefied natural gas (LNG) producers already churning out as much as they can, there is little availability to make up for the large volumes from Russia.

Algeria, which has pipelines to Spain and Italy, boosted oil and gas output last year by 5%.

Algeria, which has pipelines to Spain and Italy and a large LNG terminal at Skikda, boosted oil and gas output last year by 5 per cent - though rising domestic consumption and political instability have capped exports.

But on Sunday the CEO of Sonatrach said the pipeline to Italy had spare capacity that could be used to increase supply to Europe.

The European Union depends on Russia for more than a third of its gas, and any interruption of flows would worsen an energy crisis that has already sent consumer bills sky high.