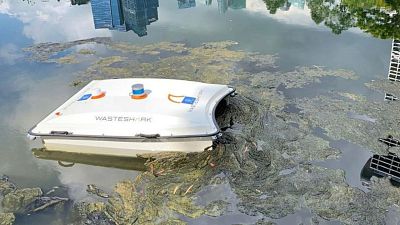 The WasteShark by RanMarine is designed to remove floating pollution such as plastics, algae and biomass from lakes, ponds, waterways and harbours.   -   Copyright  WasteShark
By Shivan Sarna  with AP  •  Updated: 21/06/2022

Millions of tonnes of plastic wind up in the ocean every year, killing plants and animals. That’s why companies around the world have developed novel devices to help reduce the ocean plastic problem.

The drones can hold 160 litres of trash, floating plants and algae, according to RanMarine Technology.

The aquatic tech is inspired by the whale shark, which swims with its mouth wide open to capture prey.

"So, that's why we have two pontoons, one on each side, so that the waste can come in from the front and it gets trapped in between the pontoons," explains design engineer Tessa Despinic.

It’s crucial to scoop up the plastic before it reaches the large ocean expanse, says Nancy Wallace, director of the U.S. National Oceanic and Atmospheric Administration's (NOAA) Marine Debris Program.

"Once plastic or trash ends up in the ocean, it's very hard to collect because it does break down. And so it gets smaller and smaller and it's just hard to get out to our big open oceans and collect the trash there.

“We'd much rather collect that trash closer to shore, which is easier, it's less costly," she says.

What other trash devices have been developed around the world?

In India, AlphaMERS Ltd has developed an inexpensive way of capturing plastic waste. It has installed steel mesh fences extending above and below aluminum floats across rivers in eight Indian cities.

The system is also easy to maintain as each mesh fence is angled to guide trash to a riverbank excavators pile it into dump trucks.

In Chennai, eight traps in the Cooum River scooped up 2,200 tonnes of plastic and 19,800 tonnes of other trash and floating plants in 2018, according to the company.

Then there's the Osprey Initiative of Mobile, Alabama in the US. The company sets up floating traps on creeks, canals and rivers in the southeast of the country and trains local crews to deal with the waste they catch.

These plastic-gobbling devices are an attempt to curb an estimated 8 million tonnes of plastic that enter the ocean every year.

"The most important thing with marine debris or plastic or trash in our ocean is we don't want it there in the first place,” Wallace from the NOAA says.

“So while all of these devices are incredibly helpful, we really need to work on the upstream solutions of generating less waste from the consumer standpoint, but also the industry standpoint.”

Overall, Wallace adds, there are a lot of different players involved in solving the plastic waste problem.

Watch the video above to see the WaterShark in action.