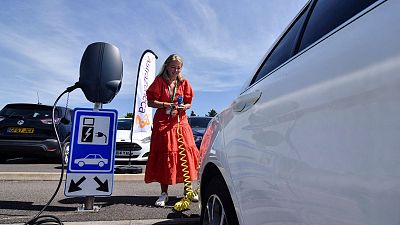 The move to electric vehicles has been one of the key strands of the energy transition so far - and with good reason.

Data from Transport and Environment shows that cars and vans alone were responsible for producing 16 per cent of the EU’s greenhouse gas emissions in 2019. Domestic transport vehicles accounted for 72 per cen****t of the EU road transport emissions total.

It’s been clear for a while that something has to change. We cannot continue to drive petrol and diesel vehicles that will run our Earth into the ground.

What are plug-in hybrid cars?

Plug-in hybrid vehicles have been a mainstream option for over a decade. They combine petrol tanks with electric batteries, which are bigger than the ones in regular hybrids, and so need recharging from an external power source.

It’s fair to say that electric vehicles have overtaken them in popularity now. In the UK for example, battery and hybrid electric vehicles now make up more than half of all new cars sold, and fully electric car sales have soared by 70 per cent in the last year.

Despite this, there’s still a lot of misinformation and hearsay about the best eco-friendly options out there.

Many argue that plug-in hybrid electric vehicles (PHEVs) are a brilliant stepping stone to entering the electric motoring world. But they can also come with a lot of misleading claims about their eco-credentials.

Pure electric vehicles have their own barriers too. Range anxiety, cost and limited charging infrastructure are just some of the hurdles giving people pause for thought.

So if you’re stuck between models, here’s what you need to know.

Is it time for hybrid vehicles to pull over?

Seen as a halfway point to electric driving, hybrids have a long-standing reputation as being eco-conscious vehicles. We all know they still produce tailpipe emissions but they also have an electric motor which should cover some shorter journeys.

Despite this, Greenpeace UK has gone so far as to call plug-in hybrid vehicles the “car industry’s wolf in sheep’s clothing.”

Following these claims, official testing confirms that plug-in hybrid vehicles have much higher emission rates than manufacturers claim. The tests were run on some of Europe’s best-selling hybrid cars - including the BMW X5 and Volvo XC60 - and show that hybrids can actually emit up to 89 per cent more CO2 than initial reporting shows.

Hybrids can emit up to 89 per cent more CO2 than initial reporting shows.

This suggests that hybrid cars are actually much closer to their petrol and diesel counterparts in terms of emissions. It’s largely down to the fact that hybrid vehicles have very limited electric driving range. Even some of the newest models on the market can only travel up to 100km using the electric motor before a petrol or diesel engine kicks in.

Global discussions have ensued as to when plug-in hybrids should stop being sold. In July, the EU Parliament endorsed an EU ban on the sale of new plug-in hybrid vehicles from 2035. The UK has also brought forward its hybrid ban to this year, from 2040.

Why are electric cars more expensive than hybrids?

One of the biggest turn offs to buying a pure electric vehicle is undoubtedly the big price tag. Generally all-electric cars cost more than their petrol, diesel or plug-in hybrid counterparts. As a comparison, the Hyundai Ioniq Hybrid has a starting price of €28,389 whereas the all-electric Hyundai Ioniq 5 is priced much higher at €45,832.

This is largely due to them being produced in smaller numbers and incorporating more advanced technology. Alongside the general increase in cost of living, people are still recovering from financial losses following the pandemic. With that in mind, it’s no wonder that consumers are struggling to find the funds to switch to an all-electric vehicle.

If people can afford a pure electric vehicle, they’re often left with fears of range anxiety and a lack of supporting infrastructure. While governments are pledging millions to expand and improve on-the-go changing points, there’s still a long way to go. In terms of range anxiety, it’s definitely still a valid worry.

That said, there are a lot of all-electric models currently on the European market that will easily travel over 200km before needing to be recharged. Plus, with EV technology always advancing, the ranges on electric vehicles are only going to increase.

Are electric cars much better for the environment?

The biggest benefit to buying pure electric vehicles is their zero emission standard. Countries across the globe are beginning to ban the sale of new petrol and diesel vehicles with the first starting in Norway in just two years. The rest of Europe is following suit with Germany, Sweden and the UK implementing the ban from 2030.

Ginny Buckley, CEO of electric car marketplace Electrifying.com, says that 100 per cent electric vehicles are a much more sustainable purchase for drivers - both environmentally and economically in the long run.

This is reflected by the rise in new sales of pure electric vehicles in the UK. Buckley adds that, “one in five cars registered in June had a plug, but the number of plug-in hybrids declined sharply, with just 5.5 per cent of the market compared to fully electric cars which had a 16.1 per cent share.”

Is it worth buying a hybrid or should I make the jump to a pure electric car?

Plug-in hybrid vehicles have something to offer the world at the moment - but they aren’t the end of our transport transition story. There’s some obvious environmental impacts that come with driving a hybrid vehicle, compared to a fully electric one.

For now, at least, it seems hybrids will be available to buy from new for another 12 years or so. That’s a long time, and arguably long enough for motorists to get their money's worth out of a vehicle. Dumping your perfectly-functioning hybrid for a shiny new EV is certainly not the sustainable choice.

With the cost of living constantly rising, the pricing of any vehicle is likely to be a key factor in consumers choosing their next vehicle. As pure electric vehicles are so expensive at the moment, they’re often well out of the price brackets of the public.

While EVs do have the benefits of low running costs and sustainability, it’s unlikely we’ll see a huge rise in ownership until sale prices fall.