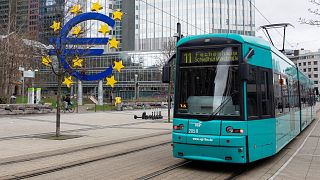 The Euro currency sign is seen in front of the former European Central Bank (ECB) building as a tramway drives past, in Frankfurt am Main, western Germany.   -   Copyright  ANDRE PAIN / AFP
By Rosie Frost  •  Updated: 11/05/2022

Across Europe, the cost of living crisis is hitting a majority of people with increased food, fuel and electricity bills.

Even before the war in Ukraine, the price of energy was rising and costs at the fuel pump were starting to sting.

Now one of the ways some European countries are offering their citizens a helping hand is to cut the price of train, bus and tram tickets.

Germany is one country that has made this choice, reasoning in its announcement that “in the current situation especially, public transport is for many citizens a necessary, efficient, cost-effective alternative to their own cars.”

At the same time, it is one of the most environmentally friendly means of transport, giving governments a dual purpose to enforce price cuts.

So how are European governments shielding consumers from surging energy prices and upping passenger numbers on buses and trains at the same time?

Ireland is cutting the cost of public transport

In Ireland, public transport fares are being slashed from 16 May - the first time in nearly three quarters of a century.

As part of a plan to reduce the cost of living and encourage sustainable transport, the cost of a ticket on a number of rail and bus services is going down.

Dublin Bus, Luas, Go-Ahead Ireland and Iarnród Éireann's (Irish Rail) DART (Dublin Area Rapid Transit) and Commuter service prices are to fall by 20 per cent for the rest of the year.

InterCity tickets run by Iarnród Éireann will also be cut, as well as a 50 per cent reduction on all subsidised public transport for young adults between the ages of 19 and 23.

The cost reduction is “unprecedented and quite radical,” according to Ireland’s Transport Minister Eamon Ryan. Passenger numbers have already increased as a result of the fare cuts, the National Transport Authority says.

The German federal government announced in March that it would be offering discounted monthly tickets on public transport.

The temporary reduction in the cost of trains, buses and trams was introduced to help people cope with the cost of living crisis.

Called the ‘9 for 90’ scheme, it offers public transport tickets for €9 per month for 90 days - or €27 for the whole three months. The scheme will run from June until September.

Earlier this month, Italy introduced a one-off public transport bonus as part of measures to soften the economic impact of the war in Ukraine.

Students and workers earning below €35,000 will be able to get €60 to help with the cost of catching the bus, train or metro. It comes in the form of an e-voucher that can be used when purchasing a ticket for these services.

The bonus is part of a €14 billion aid package introduced by Prime Minister Mario Draghi to “fight the higher cost of living” and is supposedly designed to encourage more use of public transport.

How is the Ukraine war affecting the cost of living crisis?