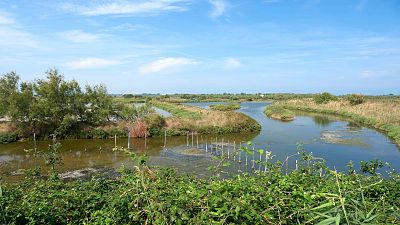 Ships from World War II resurface in the Po River; water levels are 7ft lower than average; temperatures in June are 3.5 degrees higher; in the first five months of 2022, rainfall is down about 50% over the past 30 years, and this spring was the fifth warmest since 1880.

These events go some way to explain why Italy is experiencing its most severe drought since 1952 and the effects on Italy's longest river, the Po.

Farmers are trying to deal with the crisis but they are not filled with optimism.

'Economic crisis and drought are putting my crop at risk'

"The future of the harvest is uncertain. What is certain is that if this drought persists it will do enormous damage." Giovanni Daghetta, the owner of a 325-hectare rice farm in the province of Pavia, told Euronews.

"For now, irrigation is the main problem. We have had to use water pumps, which are very expensive, to water our fields," Daghetta said, a former president of the farmers' union in Lombardy.

"If the forecasts don't change we will have extensive damage."

The weather forecast for the next two weeks in Italy does not look good. It predicts there will be no rain in the province of Pavia, and temperatures will range between 22 and 33 degrees, with a peak of 38 next weekend.

Daghetta doesn't know exactly how much he will lose at harvest time for his rice crop, which takes place between September and October. But the effect of inflation on prices is also worrying.

"We're paying three times as much for nitrogen fertilizers as normal, diesel fuel twice as much. If you now add in the drought....".

Droughts are nothing new in Italy, which is used to water shortages.

"It is the timing and magnitude of the crisis that are frightening," Meuccio Berselli, secretary-general of the Po River District Basin Authority, a public body operating under the supervision of the Ministry of Ecological Transition, told Euronews.

"The rain that fell on Tuesday doesn't solve the problem, it postpones it for a few days," he said.

Images from the European Space Agency give an idea of the scale of the crisis.

"This winter it hasn't snowed, in some locations it hasn't rained for 120 days. August weather conditions have moved forward by a month-and-a-half," Berselli said.

The National Confederation of Direct Farmers (Coldiretti) estimates that drought in the Po Valley area threatens more than 30% of the national agricultural production.

"All sectors are affected," Berselli says. "We had to reduce water withdrawals from the river by 20% for agriculture, and the hydroelectric power plant in Monticelli d'Ongina was shut down because there was not enough water to generate power."

The plant's power source was replaced by gas, with a significant increase in costs and CO2 emissions.

Marco Piccinini, president of fruit growers in Emilia Romagna, said that if the water crisis persists, watering orchards will cost an average of €430 per hectare in electricity costs alone. In 2020, it cost €92.

"We risk not completing the corn, tomato and wheat harvests," Berselli says.

Another problem related to the irrigation of fields, is that of the rising salt water, with sea water that has penetrated into the interior of the Delta.

"This compromises the surface water in that area because brackish water obviously cannot be used for harvesting."

Rising salt levels has more than quadrupled prices for irrigation and risks desertification and crop loss.

In Piedmont alone, 170 municipalities are rationing drinking water. Experts say this situation could have been prevented.

"The lack of water is a structural problem that has been postponed for the past 20 years and has never been properly addressed," Barbara Di Rollo, an expert on agricultural fields irrigation, told Euronews.

Berselli agreed.  "We should have more investment from the regions and the government."

Some possible solutions could be the building of reservoirs throughout the region; the use of intelligent systems that allow irrigation to be adjusted according to the needs of the plant through probes in the ground; or the use of organic matter, to increases a plant's conservation capacity. These however, require planning and targeted investment.

Berselli and Di Rollo agree that the waste of drinking water from the source to tap should be solved: more than 40% is lost through holes in the pipes.

Italians use a lot of water. In 2018 they used more than 150 cubic metres per person in 2018, according to Eurostat data.

In the same year, based on Istat data, the economic damage resulting from water waste was €4 billion.