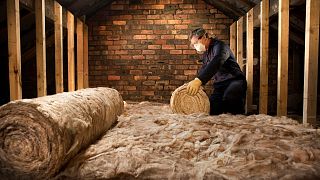 Home insulation is coming under renewed focus because of the Russian invasion and related energy crisis.   -   Copyright  Getty Images
By Lottie Limb  •  Updated: 30/03/2022

The cheapest energy is the energy you never have to produce in the first place.

‘Efficiency’ is a term so often used that it has become bland. But conserving energy could be just what we need to cope with the rising cost of warming our homes, offices and public spaces. In short, ‘energy efficiency’ simply means using less power to achieve the same result.

Realising that saving energy equals creating it, is one of the many small but essential mindset shifts needed alongside renewables, to get us out of the energy crisis.

Insulation is an important and tangible form of energy efficiency. Rolls of material laid out in your loft, or cavity insulation between inner walls keep the warmth in.

In the UK, Extinction Rebellion offshoot Insulate Britain has been bringing this solution to our attention since September 2021. Their message, and ‘radical’ motorways blocking tactics, are looking increasingly reasonable to the British public, who are facing rising living costs from soaring energy bills and petrol prices.

“Ordinary people were already experiencing a cost of living crisis before the war in Eastern Europe,” a spokesperson for the group tells Euronews Green. “A dependence on oil is destroying the fabric of our societies whether it is Russian or Saudi Arabian.

“In order to reduce the resources of petro states and therefore their ability to wage war. We must reduce our dependence on oil and gas. In order to do that, we need to Insulate Britain.”

In 2021, the world’s leading energy organisation said the exploitation and development of new oil and gas fields needed to stop that year if we are to stay within ‘safe’ limits of global heating and meet net-zero emissions by 2050.

In response to Russia’s invasion of Ukraine, the International Energy Agency (IEA) has released a 10-point plan to wean the EU off Russian gas.

‘Accelerating energy efficiency improvements in buildings’ is point eight on the list. It notes that currently, only about 1 per cent of the EU’s building stock is renovated each year. A rapid extension to an additional 0.7 per cent - upgrading the least efficient homes first - would be possible through improved insulation and other steps, the IEA says.

“This would save more than 1 billion cubic metres (bcm) of gas use in the space of a year and would also bring benefits for employment.”

Boosting building retrofits - and the rollout of other measures, like replacing gas boilers with heat pumps - would speed up routes that are already part of EU policy. Namely the European Commission’s “Fit for 55” framework - which lays out how the bloc can reach its legally-binding target to cut emissions to 55 per cent below 1990 levels by 2030.

The energy efficiency and buildings directives within it are projected to reduce indoor gas demand by 45 bcm per year compared with today. To put it into context, that’s more gas than Hungary consumes in a year.

What can you do at home?

Though directed at policy-makers, the IEA’s plan also includes some helpful steps to take at home. It includes recognising that energy is a line in the war - albeit a distant one for most of us.

“Many European citizens have already responded to Russia’s invasion of Ukraine in various ways, via donations or by directly assisting refugees from Ukraine,” the plan says. “Adjusting heating controls in Europe’s gas-heated buildings would be another avenue for temporary action, saving considerable amounts of energy.”

Based on its recommendations, here are some of the ways you can get your own home up to speed:

‘Governments, not homeowners, should lead the way’ - say Insulate Britain

All of this comes at a cost. Many governments, including those in France, Germany and the Netherlands, have introduced grants that homeowners can apply for to help cover the costs of insulation and other efficiency upgrades.

After shelving its ‘Green Energy Grant’ last year, the UK government has announced £6.6 billion (€7.9 bn) in funding to decarbonise buildings, with around a third of that aimed at lower-income households.

Insulate Britain are campaigning for more, demanding the government fully fund the insulation of all social housing in the UK by 2025. They want this to be followed by a nation-wide plan to tackle all of Britain’s leaky housing stock.

The energy crisis cannot be tackled one home improvement at a time, the activists say, and stronger leadership is needed.

“The next steps are for ordinary people to ensure that the government does what's right and that is to protect the people in this country,” an Insulate Britain spokesperson added.

“Unfortunately this is no longer about what steps individual homeowners can take, it’s about whether our civilisation can survive or not. In order to do that we need a mass rollout of various programmes including one to Insulate Britain.”

“Cutting the green crap” has already cost the UK £2.5 billion

As an old Chinese proverb says, “The best time to plant a tree was 20 years ago. The second best time is today.”

In the UK, the seeds of green energy were ploughed up 10 years ago by the Tories when Cameron vowed to “cut the green crap”. Pulling out green subsidies led to a 92 per cent and 74 per cent drop in homes getting loft and cavity wall insulation respectively. A recent Carbon Brief analysis shows that our energy bills are now £2.5 billion higher (almost €3 bn) as a result.

As well as putting pressure on the government to take responsibility for energy efficiency, individuals can push for change at work.

UK businesses currently waste enough energy annually to power the Greater London area for more than seven years, research from eEnergy shows. Corporate investment is picking up pace, according to the leading energy services company, and the IEA plan has plenty more suggestions for both home and offices.

Notably, Turning down the thermostat for buildings’ heating by just 1 degree C would reduce gas demand by some 10 bcm a year.