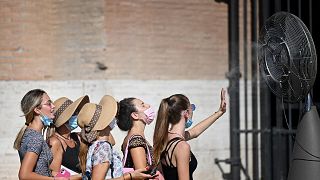 A group of woman cool off in front of a cooling fan during a heatwave as they queue at the enterance of the Colosseum in Rome.   -  Copyright  ALBERTO PIZZOLI / AFP
By Rosie Frost  •  Updated: 25/04/2022

Italians could be facing a long hot summer with plans to limit air conditioning in schools and public offices to no lower than 25C.

Called ‘operation thermostat’, the energy rationing scheme is meant to help the country reduce its reliance on Russian gas. Though it is not yet law, the government’s environment and business committee has approved this amendment to Italy’s Energy Decree.

Minister of Public Administration, Renato Brunetta said the new rules could save between two to four billion cubic metres of gas in 2022 - roughly the same amount as the average yearly gas consumption of 2.7 million homes.

Pledging to comply if the EU decides to impose an embargo on Russian gas, he said that if supplies were to stop today, the country’s reserves would last until the end of October.

Draghi also suggested that turning down air conditioning and heating systems could be one of the ways to reduce energy consumption during the current crisis.

Italy imports 95 per cent of the gas it uses and 40 per cent of that comes from Russia. It has been looking for alternative options since Russia’s invasion of Ukraine on 24 February including new deals to import gas from Angola, Algeria and the Republic of Congo.

Last Thursday, ministers said they believe Italy will be able to end its reliance within 18 months after previously stating it could take up to two years.

What are the new rules around air conditioning in Italy?

The rules are due to come into force on 1 May and last until 31 March 2023, according to reports from the Italian newspaper Corriere della Sera.

Currently, local authorities can specify what months of the year heating and cooling systems can be used - but not the temperature. The new amendment would change that.

‘Operation thermostat’ so far includes schools, post offices and other government buildings in the country. Fines could range from between €500 and €3,000 for those who don’t comply but it isn’t yet clear how these temperature limits will be enforced.

The rules also don’t apply to hospitals or nursing homes but the government is hoping that private companies and people in their own houses will follow suit to support the energy-saving effort.