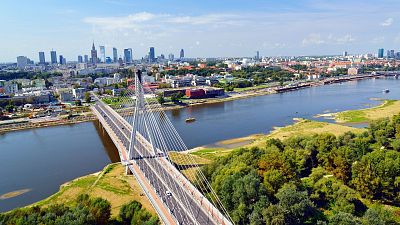 Poland is rethinking the role of natural gas in its transition away from coal-fired energy, as it seeks to avoid dependence on Russian fuels.

Russia's invasion of Ukraine has compelled the European Union to attempt to reduce dependence on fossil fuels from Russia, which supplies 40 per cent of the EU's gas, 27 per cent of its oil imports and 46 per cent of coal imports.

"If we want to do that in the short term, we're going to have to reconsider the plans we forged in the past. Looking at Poland's current legislative situation, it's pushing us very clearly towards more consumption of gas," said Adam Guibourge-Czetwertynski, the country's undersecretary of state for climate, at an EU meeting on Thursday.

"We're looking at that again to see how we can reduce our dependence on gas during this transitional period."

Coal, the dirtiest fossil fuel, generates around 70% of Polish electricity.

Coal, the dirtiest fossil fuel, generates around 70 per cent of Polish electricity. That would need to drop under the EU's target to cut emissions 55 per cent by 2030, from 1990 levels.

The government had expected lower coal use to trigger a surge in Polish gas demand this decade to supply new gas-fired power plants. But this recent announcement suggests otherwise.

Any new demand would be largely met by imports. Russia provides around 55 per cent of Polish gas imports, 66 per cent of oil imports and 75 per cent of imported coal, according to think tank Forum Energii.

Poland's long-term supply contract with Russia's Gazprom expires at the end of this year. The country plans to replace that supply via a new gas pipeline from Norway, expected to be ready by November. So there is still a way to go if it wants to wean itself completely off fossil fuels.

But shrinking the role of gas could herald a bigger role for nuclear energy.

Warsaw plans to have its first nuclear plant operating in 2033.

The ministry expects Poland to have a total of 6-9 GW of nuclear power by 2043, which will account for around 10 percent of power generation.

The reactors for the planned final nuclear capacity of 6–9 GW are expected to cost over 100 billion zloty (€22.5 billion)

The reactors for the planned final nuclear capacity of 6–9 GW are expected to cost over €22.5 billion.

While a giant nuclear reactor is what the Polish government wants to build, some are sceptical - concerned about the dangers nuclear energy can pose. Energy expert Marcin Roszkowski from the Polish think tank Jagiellonian Club thinks the country should be using modular reactors instead to reduce the risk.

"There are now much smaller reactors, with a capacity of 50 and 100 MW,” he told DW. "These are modular reactors that can be combined. They can be dispersed across larger areas and supply individual cities and factories with energy."

"This would prevent a major nuclear disaster," he said.

Meanwhile, EU countries are negotiating new climate policies, which some want fast-tracked to address soaring energy prices and quit Russian gas, while others are wary of potential upfront costs.