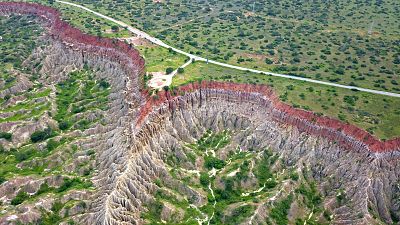 Italy is now turning to Africa to help wean itself off Russian gas, ever since the invasion of Ukraine put crucial supplies at risk.

The European nation is striking deals with Angola, Algeria and the Republic of Congo with the aim of eliminating Russian gas imports in the next 18 months. Italy currently receives 38 per cent of its natural gas from Russia, and is working on deals to replace about half.

Foreign Affairs Minister Luigi Di Maio has since announced that they will increase exports of Angolan gas to Italy. On Thursday, the country’s leading energy company ENI signed a similar deal with the Republic of Congo.

Appearing alongside Congolese foreign minister Jean Claude Gakoso in Brazzaville, Congo’s capital city, Di Maio announced that the Russian attack on Ukraine has obliged Italy to diversify its sources of energy. There is concern that Russia might turn off the taps in response to sanctions, a threat which would have devastating effects on the third largest European economy.

The deal with Angola calls for a new Liquefied Natural Gas (LNG) project that is expected to launch next year with a capacity of up to 4.5 billion cubic metres a year, once fully operational.

What’s more, the government in Rome is rumoured to be trying to diversify gas sources even further by making new deals with Qatar, Azerbaijan and Mozambique too.

How much is Italy investing in renewables?

Over a third of the electricity produced in Italy comes from green sources. Hydroelectric power has always dominated, followed by solar, bioenergy, wind power, and geothermal.

The government has become well-known in recent years for introducing green schemes to help residents, such as paying homeowners 110 per cent of costs to eco-proof their homes. And local residents have taken things into their own hands too, recently building an underwater sculpture park to help save coral reefs.

Italy is currently building its first offshore wind farm which will consist of 10 turbines - equal to the annual energy needs of 60,000 people.

The country ranks third in Europe for both renewable power consumption and electrical and thermal power production from renewable resources.

It is one of 14 EU countries that reached its 2020 target of renewables as a percentage of total energy consumption (18.2 per cent versus a 17 per cent target).

However, messy permitting has led to yet another undersubscribed wind auction in Italy this year. It is extremely difficult to get the approval of public authorities to build new renewable infrastructure. As a result, a staggering amount of projects are currently stuck in bureaucratic procedures.

According to experts, Italy is not currently building enough new wind farms to meet its European energy and climate commitments.

The EU’s Renewable Energy Directive requires member states to grant permits for new wind energy projects within two years. This should take no longer than one year.