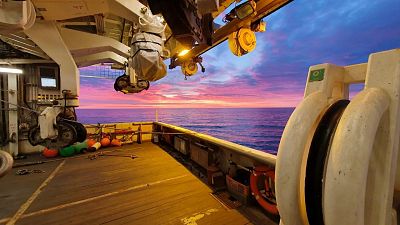 A new report delivers a damning verdict on the proposed seismic blasting in the Irish Sea.

The UK government’s Nuclear Waste Services (NWS) is set to carry out seismic surveys off the Cumbrian Coast between July and August this year.

They are looking for a place to dispose of the waste produced by Britain’s nuclear reactors.

The report, commissioned by Radiation Free Lakeland, calls for these plans to be postponed, claiming the impact assessment by NWS is "deeply inadequate" and "lacking in appropriate scientific and academic rigour".

What is seismic blasting?

Seismic blasting is a process that allows scientists to find out more about the geography of the sea bed. Loud, repetitive blasts of sound are produced from an underwater airgun - like a powerful horn - and their echoes are measured to map the underwater rocks.

The airgun will fire every 10 to 15 seconds, throughout the survey period of around one month.

The surveys, commissioned by NWS, will be looking into the possibility of locating a Geological Disposal Facility (GDF). Deep under the seabed, this facility will be used to dispose of the UK’s toxic legacy of high level nuclear waste - the highly radioactive byproducts of nuclear reactors.

Shearwater GeoServices, the company which last year saw the high court put an end to its work on South Africa’s ecologically sensitive Wild Coast, is carrying out the investigations.

“We commissioned an independent report because we need to counter the PR spin from the nuclear waste industry who are calling the seismic testing ‘non-invasive scientific research,’" says Marianne Birkby, Founder of the campaign group.

She argues that, rather than seismic blasting for scientific purposes, the plans facilitate a commercial venture for a “deep nuclear dump for heat generating nuclear waste.”

A limited company that wants to enable ever more nuclear waste from new nuclear builds, Radioactive Waste Management, is behind it, Birkby claims.

Protections clearly mean nothing when the nuclear waste industry wants to pave the way to a deep nuclear dump.

“Despite the marine protections this part of the Irish Sea has, it is an outrage that independent environmental impact assessments have not been carried out. Protections clearly mean nothing when the nuclear waste industry wants to pave the way to a deep nuclear dump.”

In response to the claims, NWS says “there is no requirement to undertake a public consultation for these surveys.”

“We have undertaken marine environment assessments requested by Natural England and navigational authorities to assess any impacts and they have been satisfied that our activities are exempt,” adds Chris Eldred, senior project manager for geosphere characterisation at Nuclear Waste Services.

They have been recorded at locations up to 4,000 kilometres from the source, and can blanket areas of up to 300,000 square kilometres with noise. Studies have shown that, because seismic surveys can disturb, injure or kill a wide variety of marine life, they can impact entire ecosystems.

Zooplankton are the base of the marine food chain and are extremely important to our ocean’s health. They are also very vulnerable to these loud noises, according to scientists.

Researchers have found that seismic surveys significantly increase the death rates of zooplankton in the 1.2 kilometre range they tested, killing all larval krill in the range.

Radiation Free Lakeland’s report says the surveys will take place when zooplankton populations are expected to be high. These creatures provide a food source for a wide variety of organisms including baleen whales, basking sharks and fish which, in turn, feed many other species.

Noise exposure can be a problem for a wide variety of Cetaceans-dolphins, porpoises and whales.

Many other marine animals rely on sound for survival too. Seismic testing can interfere with basic functions such as communication, navigation, feeding and mating.

“Noise exposure can be a problem for a wide variety of Cetaceans-dolphins, porpoises and whales,” according to the Zoological Society of London’s Cetacean Strandings Investigation Programme.

The NWS investigation will focus on a survey area five to 20 kilometres off the Cumbrian coast in the north west of England in an area of approximately 250 square kilometres. The proposed GDF may extend over an area of 25 kilometres square, deep beneath the seabed.

This region is one of a number of designated Marine Conservation Zones in the Irish Sea. It has protected habitats and is home to a number of European protected species, such as sea turtles, minke whales, common and bottlenose dolphins, and harbour porpoises.

“The Irish Sea is rich in marine life, from soft corals and reefs that provide shelter for crabs and anemones to seals, whales and around 30 species of shark,” says Joan Edwards, director of policy at the Wildlife Trusts.

“Sandbanks and gravel habitats are vital nursery grounds for flatfish, sea bass, and sea eels, while also acting as a feeding ground for thousands of breeding seabirds.”

We are concerned about the implications of seismic testing in the Irish Sea, which evidence shows can be devastating for marine life.

Joan Edwards
Director of Policy at the Wildlife Trusts

Marine habitats are already under huge pressure from pollution, irresponsible development and bottom trawling - as well as the consequences of climate change, she explains.

“We are concerned about the implications of seismic testing in the Irish Sea, which evidence shows can be devastating for marine life.”

The report claims many of the hugely important marine species found in the area have not been studied for their sensitivity to seismic surveys.

A ‘marked lack of transparency’ from Nuclear Waste Services

Marine radioactivity researcher and consultant Tim Deere-Jones is the author of Radiation Free Lakeland's report. He says that NWS’s licence application for the seismic survey is characterised by “a marked lack of transparency.”

It also shows a refusal to engage in consultations with the public and marine stakeholders such as fishermen. Deere-Jones claims they have carried out what is essentially a private in-house environmental impact assessment - with no independent oversight.

“NWS has also ignored the comment from Professor Popper, a leading authority on fish bioacoustics.”

Popper warns of a clear “information gap” that makes it impossible to reach a clear conclusion on the effect that these blasts could have on animal behaviour or health.

As a result, Deere-Jones warns, NWS has produced an “inadequate and inaccurate impact assessment” on the effects of the airgun surveys on marine species present in these regional Marine Conservation Zones.

“My recommendation is that consideration of the proposed survey, and all such surveys in UK waters, should be postponed until the information gaps referenced by Professor Popper have been filled and properly informed impact assessment decisions can be made,” he adds.

The report concludes with the recommendation that suitable alternatives to airgun seismic surveys, which pose a lesser threat to marine life, should be considered.

UK Prime Minister Boris Johnson has put nuclear at the heart of the country’s new energy strategy. There are now plans to build up to eight new nuclear reactors in the country.

However, as yet, no permanent and safe storage method has been found for high-level nuclear waste. It remains hazardous for many thousands of years, threatening human health and the environment. 250,000 tonnes of this waste is currently in temporary storage around the world.

The UK government, similar to many others, favours deep geological disposal to deal with the most radioactive waste - whether deep below ground or deep beneath the seabed.

However, there are still many concerns about this £53 billion (€62 billion) facility in the Irish Sea, which has not been tried or tested and provides no guarantees of safety.

Is this the 'Chilean Chernobyl'? 75 people poisoned by sulphur dioxide