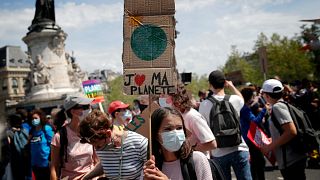 Tuesday’s vote comes on the back of devastating floods in Germany and Belgium which many experts say are a textbook example of extreme weather caused by climate change.

A panel of 150 citizens convened by French president Emmanuel Macron worked for months to come up with recommendations for the legislation, but critics complain the president weakened their proposals. Months of wrangling in both houses of parliament caused these to be watered down even further.

Still, the final version of the text includes provisions to phase out polluting vehicles, speed up the renovation of energy-inefficient buildings and limit plastic waste.

French minister for the ecological transition Barbara Pompili said the legislation marked a “cultural shift”, by placing environmental concerns at the heart of French citizens’ lives.

So what will this law actually change?

By 2025, French cities of more than 150,000 inhabitants will have to create low emissions zones with tighter speed limits and restricted access for some of the oldest and most polluting vehicles, whether they run on diesel or gas.

Experts estimate that roughly a third of the cars currently on French roads would be excluded from these zones.

Some of the most polluting vehicles will also be banned from the roads from 2030.

No more hopping on the plane?

The law aims to wean some travellers off aeroplanes and get them on low-carbon rail instead. Domestic flight routes will be scrapped if a train can reach that destination in less than 2 ½ hours.

But there will be exceptions, and environmental campaigners say the devil is in the details.

Domestic flight routes will be scrapped if a train can reach that destination in less than 2 ½ hours.

The citizens’ assembly had recommended scrapping flights for journeys that could be done by train within 4 hours. Greenpeace says bringing this down to 2 ½ hours will affect barely a handful of the country’s hundred or so flight routes - significantly eroding the environmental impact of the law.

The law aims to introduce mandatory "environmental labelling" of goods and services, with a focus on high-polluting sectors such as the textile industry. The labels would essentially aim to set up a "carbon score" informing consumers of the environmental footprint of their purchases.

The law will also ban advertisements for fossil fuels, and, starting in 2028, prohibit commercials for the most polluting vehicles (emitting more than 123g of carbon dioxide per kilometre).

Rent will be capped for apartments and houses with the poorest energy efficiency ratings, also known in France as "thermal sieves". These account for around 5 million dwellings nationwide.

From 2025, homes with an energy efficiency rated F or G - the worst possible score - will no longer be considered decent housing, and owners will need to renovate them before they can legally rent them out again. From 2034, the rental ban will apply to dwellings rated E too.

For Greenpeace France, the only real positive step in the climate law is its effort to encourage a more plant-based diet.

By 2023, school cafeterias will have to feature an exclusively vegetarian menu at least once a week. Across public administration buildings, canteens will have to offer veggie options each day.

The French government says the legislation will help France on its target of cutting greenhouse gas emissions by 40 per cent by 2030 when compared to 1990 levels.

But many environmental activists say that’s simply not ambitious enough, especially now that the European Commission has unveiled its "Fit for 55" plan for slashing carbon emissions by 55 per cent by 2030.

WWF France called the final version of the law "very far removed from the climate goals and expectations of citizens" while Greenpeace described it as "hugely disappointing".

An independent advisory body on climate change as well as France’s top administrative court, the Council of State, have both already voiced serious concerns regarding the government’s ability to honour its commitments under the 2015 Paris climate accord.

The Council of State has even threatened the government with a fine of 10 million euros per semester if it doesn’t take more decisive action against air pollution.