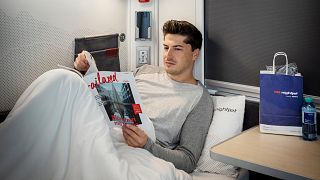 Rail travel is gathering steam as one of 2023’s top trends.

With emissions from long distance rail journeys 20 times lower than your average commercial flight, the environmental bonus of travelling by rail is huge. But travellers aren’t only switching to trains for their sustainability credentials.

As surging fuel prices push up the cost of flights, demand is growing for no-fly itineraries - and new routes are making cross-country train travel more convenient and accessible.

From Europe to the US, improved connectivity and high-tech advancements are ushering in a new ‘golden age’ of train travel. Here’s how the rail revival trend will develop in the year ahead.

Europe’s train travel trend is on the fast track

Rail travel has increased throughout Europe and the UK this year, especially among North American visitors.

“Earlier this year, we released data showing US tourists were taking the train in record numbers this summer,” says Mike Hyde, chief data officer at booking platform Trainline. “Ticket sales to US-based visitors were up 93 per cent in France, compared to pre-pandemic, and 137 per cent in Italy.”

He also notes that the top ten UK destinations for US visitors included cities beyond London like Cambridge, Edinburgh, Oxford and York.

Though no-fly itineraries are growing in demand, multi-country train excursions can be difficult to plan from a cost and logistics perspective. Everyone from rail operators to tour companies are seeking to address this.

Switzerland will soon launch the GoldenPass Express, the first line linking the French and German-speaking parts of the country from Montreux to the Bernese Oberland. Adventure travel pioneer Intrepid has teamed up with UK slow travel company Byway to connect no-fly travellers to tour start points by train.

Europe’s network of sleeper trains is also set to grow in 2023, making it easier and more cost-effective to travel the continent by rail, while maximising time spent moving from place to place.

One of the most exciting initiatives is Nightjet, an international consortium led by Austria’s ÖBB. Debuting next year, the company’s ‘new generation of sleeper trains’ double-down on privacy and comfort. Scandi influenced design, wireless charging points, and ensuite bathrooms are just a few of the amenities offered.

Nightjet has already established routes connecting Vienna, Munich and Paris, as well as Amsterdam and Zurich via Cologne. Within weeks, it will launch a Zurich to Rome train via Milan. By 2024, it will also introduce a sleeper connecting Berlin, Paris and Brussels, and a connection between Zurich and Barcelona.

Meanwhile, another new player, the Belgian-Dutch social cooperative European Sleeper, is on a mission to ‘put travel by night train back on the map’. Its first launch will connect Brussels to Prague via Amsterdam and Berlin (expected winter 2022).

European Sleeper also plans to launch direct services to winter sports and sun destinations in partnership with Sunweb Group. The hope is to kick off with sleepers to the French Alps this December, followed by sleeper trains to the beaches of southern France in summer 2023.

And in 2024, Parisian start-up Midnight Trains will start to roll out its luxury Orient Express-style trains from Gare du Nord Paris to Rome, Porto and Copenhagen.

The USA has a long way to go if it wants to persuade travellers to ditch gas-guzzling planes for long distance trains.

As highlighted by transit campaigner Hayden Clarkin on Twitter, one of the country's busiest air routes - New York to Chicago - takes 19.5 hours via Amtrak on a daily train. A journey of the same distance from Beijing to Shanghai in China takes just over four hours, with trains leaving every 20 minutes.

Next month I am traveling from NYC to Chicago, the 3rd busiest air route in the country, which takes 19.5 hours via Amtrak on a daily train. This is the same distance as Beijing to Shanghai, which takes only 4.3 hours and leaves every 20 minutes. This country can do better. pic.twitter.com/bfV0pGG5Vg

But next year, a raft of new launches will help persuade travellers that long distance trains can be convenient, comfortable and fun. This comes off the back of President Biden’s US$66 billion (€66.3b) funding package for USA passenger rail, which promises to transform Amtrak and revive interest in cross country rail travel.

Currently, Amtrak offers 37 train routes connecting to more than 500 destinations throughout 46 US states and Canada. Long as the journeys may be, Chicago has route availability connecting to New York, New Orleans, Seattle and Los Angeles. In the South, it’s a different story - Florida, for example, is only served via the Silver Service/Palmetto and the Auto Train routes.

Rail travel has a similar presence throughout the Americas. VIA Rail Canada has over 400 stations from Hallifax to Vancouver, though a majority of them exist in Ontario, Quebec and the Atlantic provinces. Mexico largely has limited passenger train travel, but has plans to launch 11 new tourist train routes over the next 25 years.

Until rail travel becomes a more realistic possibility, most passenger trains throughout the rest of South America will likely remain tourism-focused. Peru’s Inca Rail serves only to transport visitors to Machu Picchu. Argentina’s Tren a las Nubes boasts the fifth highest railway in the world, but only covers a small distance between Salta, the Toro Gorge and the Polvorilla Viaduct.

Underpinning the hype around rail is the promise of technology innovations that could make super high speed trips a reality. Polish startup Nevomo is developing MagRail technology that uses magnetic levitation to operate at speeds up to 550 kph on existing railroad tracks.

Even more exciting is the company’s ‘hyperloop’ vision: a cross between a train and plane that will enable travel between Frankfurt and Berlin in 30 minutes at up to 1,200 kph. It is hoped that Nevomo’s first trains will start to run between Krakow and Gdansk in 2023, reducing the journey time from six hours to around 35 minutes.

But for the trend of passenger train travel to have a lasting presence in the mainstream, accessibility and practicality are vital. Routes must be both affordable and accommodating, offering passengers options to visit nearby towns and neighbouring countries alike.

International travel currently relies heavily on the convenience, availability and widespread embrace of air travel. Companies and tourists throughout the travel industry must equally be on-board with the future of rail if it’s to evolve from an ‘alternative’ to a primary means of travel in 2023.

The rail revival trend is explored in more detail in Expedia and Euronews Travel's Trend Report.