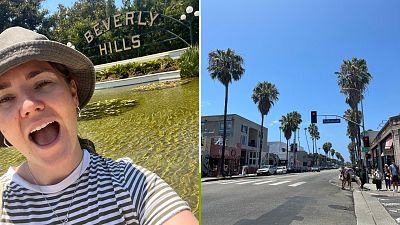 My best friend’s wedding brought me over to the US for the very first time this summer. After 28 years of gorging on series like ‘Friends’ and ‘Sex and the City’ - and knowing entire scripts to movies like ‘The Parent Trap’ and ‘Mean Girls’ - I was finally visiting the U S of A. It was a surreal feeling.

And I wasn’t just staying anywhere, I spent two whole weeks in LA - in the heart of West Hollywood.

I chose to stay in Hollywood because, let’s face it, it’s just so iconic. Roller skaters gliding down Sunset Boulevard and celebrities passing by with non-fat, non-dairy, oat milk, skinny, decaf lattes are just a regular occurrence - I thought. And I couldn’t have been more right.

On my first day, Gwyneth Paltrow drove past in a Mercedes jeep on Melrose Avenue - and after just a week here I had already dined in the same restaurant (exclusive hotspot Craig’s) as Eva Longoria.

I went to the star-studded capital expecting huge portions of food in every restaurant (true), over-friendly staff greeting me in every store (true) and for everyone to comment on my very British, RP accent (true).

But let me tell you, what I wasn’t expecting about Hollywood was how close to nature I would feel - or how sustainable the lifestyle is there.

How to get around: West Hollywood is California’s most walkable city

The traffic jams in LA are infamous. In fact, Kylie Jenner (an LA local - voted the youngest billionaire in the world in 2020) is known to take 17-minute flights just to get across the city and avoid getting in the car. Pretty outrageous.

Public transport infrastructure is virtually nonexistent in LA, so while staying here, you do find yourself relying on Ubers a lot to get around.

But, while I did get stuck in a few cabs during rush-hour, I was always relieved to get back to West Hollywood as it’s so much more accessible on foot.

Compared to other parts of LA, you see people out and about a lot more in WeHo. There are bike lanes too - 517 to be exact. And summer is the perfect time to cycle as the weather is so balmy and warm, no one wants to be stuck in the car in this climate.

Plus, since the COVID pandemic, there is much less smog in LA as the air quality has improved.

There are a whole range of walking tours you can take to discover different sides to West Hollywood, including the ‘Architectural and Golden Era Walk’ and even the ‘Andaz Rock' n 'Roll Walk’.

I went on a walking tour of, ahem, celebrity homes. Embarrassing I know - but it was pretty cool to see stunning mansions belonging to the likes of Mila Kunis, Johnny Depp, Katy Perry and Kylie Minogue. Plus, up in the Hollywood Hills, you can peek into the sprawling homes of celebs like Justin Timberlake and John Legend.

If you want to feel like a real LA local, go roller skating at Sunset Strip Roller Rink. It’s right next to Carney’s Hot Dogs on Sunset Blvd and is open all summer long from 2pm to 10pm - with DJ sets playing all day and a fun, friendly atmosphere.

I also recommend visiting Hollywood’s many parks - another thing I hadn’t expected to do. From the quaint, pet-friendly ‘Kings Road Park’ to ‘Plummer Park’, home to fitness fanatics and picnic-dwellers alike, WeHo has some gloriously grassy spots to sit back and enjoy the sun.

Another cool thing about this walking capital is the amount of carpool initiatives advertised everywhere, to reduce the amount of single-person journeys around the city.

There are signs up on the highways which restrict certain lanes for carpool vehicles. It’s described as ‘a traffic management strategy to promote and encourage ride-sharing’. For me, that stood out as a great incentive to get people to share their journeys - and it’s not something I’d seen so enforced in Europe.

Where to eat: The dining scene is a vegan’s paradise

You’ve heard of green juice in LA (which is absolutely a thing), but there’s so much more in the world of food and drink which is not only healthy, it’s vegan.

As soon as I arrived, a few people recommended that I visit a plant-based restaurant called Gracias Madre West Hollywood. It’s a ‘Meatless Mexican’ joint, all vegan and organic, with a big tequila and drinks menu.

I had mushroom quesadillas, vegan ceviche, ‘chorizo’ empanadas and delicious, classic tacos. The guacamole was also top notch, with lots of ‘arugula’ scattered on top (a term I soon learnt meant rocket lettuce in the US!). So LA…

Then there is Crossroads Kitchen, another plant-based gem in WeHo. The best bit about this elegant, upmarket restaurant is that you’d never guess it was vegan.

The menu has dishes like ‘Spaghetti con Nduja’ and ‘Lasagna Bolognese’ which look like meaty options…but they’re not. The result is that the place draws in customers from all walks of life, who hear the food is good, but don’t necessarily put two and two together that it’s vegan. I had the Nduja spaghetti which boasted a spicy, plant-based substitute for the pork sausage I know and love, and it did not disappoint.

They also do a wide variety of red, white and rosé wines - I went for a bottle of the Santa Barbara Sauvignon Blanc which was refreshing and crisp.

On the subject of good food, I couldn’t write about LA without mentioning the slightly cult-like (and absurdly expensive) supermarket ‘Erewhon’.

Erewhon first opened in Santa Monica in 2018 and has since become LA’s ‘hottest hangout’, attracting celebrities and influencers to shop at this ultra health-orientated grocery store. There are now six Erewhon stores in LA alone - it is literally one of the coolest places you can go to ‘see and be seen’.

However, jokes aside, it is actually a legitimate company. Certified as B-Corp, Erewhon only sells organic, local and sustainable produce, from fruit and veg to meat, dairy and sweet treats. It supports small, emerging brands, works with regenerative farms and has little to no plastic packaging in stores.

Erewhon is definitely worth a visit on your quest for good food in LA…even if it’s just for the celeb spotting.

Where to stay: Sustainable luxury is the way to go

There are plenty of hotels to choose from in LA - but West Hollywood is one of the best places to stay as it’s in such a central location.

If you’re looking for something upmarket, there’s The Chamberlain, The Mondrian or the famously expensive Chateau Marmont.

Chateau Marmont is that glitzy hotel featured in films like ‘La La Land’, ‘A Star Is Born’ and, more recently, in the Netflix show ‘Inventing Anna’ - it’s quite a place and definitely worth a visit.

All of these hotels are right in the heart of WeHo and have rooftop views and chic, elegant decor.

For a more budget option, you can go for the Hilton Garden Inn, which is less exclusive, but perfectly adequate for a couple of nights.

I stayed at 1 Hotel West Hollywood - as I had heard it was famed for its sustainable credentials.

Right on Sunset Boulevard itself, the building is very open and airy with sunlight pouring through the windows. Not only was my stay comfortable and pretty luxurious (a power shower to die for), it was clear that the hotel lived up to its green reputation.

Hanging plants absolutely dominate the building, from the lobby to the staircase to the shelf units in my bedroom - it’s like a big indoor garden. Reclaimed wood covers every surface you can see, from the cork wallpaper in the corridors to the oak tables in the lobby and recycled floorboards.

My room was beautiful too - with organic cotton sheets and refillable products from eco-friendly brand Bamford in the bathroom.

But one of the most unique things I loved was the hotel’s give-back-to-charity initiative. When you get to your room, you are given a small wooden block which tells you that in case you’ve overpacked, you’re free to leave clothing in the hotel after you leave - as they partner up with a local charity which they donate items to.

I ended up leaving my black high heels (packed for the aforementioned wedding I was out here attending) as they were bulky for my suitcase but still had a lot of life left in them. I was happy to know they were being passed on to someone else.

The food down in the hotel lounge and rooftop restaurant is delicious, if a little on the meaty side, but you get a lot for your money - as portions are sizeable.

One of my favourite meals of the whole trip was at the hotel’s rooftop restaurant, Harriet’s, which is completely open-air and gives you unbeatable views over the LA skyline at night. It’s not easy to get a reservation there, as tables book up weeks in advance and the clientele is bougie… But what is a visit to LA without pretending you belong somewhere like that?