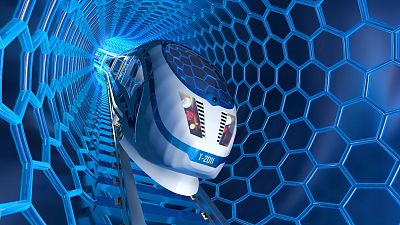 New technologies are leading the way in reimagining what it means to travel across Europe by train   -   Copyright  Canva
By Shannon McDonagh  •  Updated: 13/09/2021

Rail travel in Europe is back in demand, there’s no question about it.

Flights across the continent are relatively short, no matter where you go, leading many to ask whether they’d be better off - environmentally and financially - moving around by train.

COVID-19 has inevitably played a role in our decisions, too. So much so that the European Commission declared 2021 as the Year of the Rail to celebrate people exploring by train.

Traditional railway companies are recognising the need to build on this velocity. France’s impending ban on flights under 2 hours has spawned plans for to once again embrace innovative domestic travel between places such as Nice and Paris. Routes that up until recently were considered deadweights compared to cheap flight options.

That said, it’s newer startups and technologies that are leading the way in reimagining what it means to travel across Europe by train.

Luxury overnight sleepers, fast magnetic tracks, and new mobile apps are all on the horizon in an exciting time for the continent’s railways.

"A train ride from Paris to Rome can take 13 hours, while a direct flight is just a little over two hours. But if you could make the journey overnight in a private sleeper car with a private bathroom, you might choose the experience over flying" : https://t.co/Bv4zJtmNHTpic.twitter.com/LXm8FOHBME

Midnight Trains is a Paris-based travel startup built on the premise of luxurious, but environmentally conscious, overnight rail journeys.

Emissions from long distance rail journeys are 20 times less than your average commercial flight - so why not make green travel classy?

Boutique-style sleeper suites will honour privacy and security and the food and drink selections are set to be modelled off of Michelin-starred dining.

You can’t book these just yet. Midnight Trains doesn’t have plans to launch until 2024 from its hub in Paris’ Gare du Nord train station.

It will provide journeys of 800km to 1,500km, from as far as Rome, Porto and Copenhagen. A final list of destinations will be confirmed once the company secures the agreements to lease carriages.

“At the moment there is no alternative for medium-distance travel other than flights or a bad night train. And the only way we can rival planes is to reinvent the train experience,” says co-founder Adrien Aumont, who also founded French crowdfunding platform KissKissBankBank.

The company currently releases newsletter updates about developments and you can find it here.

This brainchild of researchers at Warsaw University of Technology is now being billed as the answer to reducing journey times. Instead of six hours to travel from Gdańsk to Krakow, it takes just 35 minutes.

From 2023 trains on Nevomo (formerly Hyper Poland’s) crowd-funded hyperloop will be able to travel at a mind melting 415km an hour. What’s more, no new tracks need to be built as the model relies on existing infrastructure with the addition of magnetic technology, known by experts as “magrail”. It’s being hailed as the “future” of our public transport systems.

A scaled down model of the system was first demonstrated in 2019. It attracted enough momentum to secure the money needed to create a three-step plan that culminates in trains reaching 1,200km an hour in the next ten years.

To find out more about Nevomo’s plans for Polish rail head here.

Created in 2016 during a lull in Europe’s interrailing industry, Nightjet connects Austria, Belgium, Germany, The Netherlands, Switzerland and Italy with its vast fleet of sleeper trains.

There is no cheaper, more environmentally friendly way to visit your favourite European cities overnight.

Guests can book overnight train stays in a personal suite or in padded bunk couchettes sleeping 4 to6 travellers apiece. A free breakfast is served onboard, along with a 24/7 menu of other paid food and drink offerings.

Its new fleet, landing in 2022, will incorporate an even more modern design, individual bathroom suites for standard rooms, touchscreen temperature regulation, and free Wifi regardless of the length of your trip.

Prices start at €49 to €59 for a couchette, €89 for bed in a 2-bed cabin or €129 for a suite all to yourself. Cheaper than a stay in many hostels across Europe, and you’re getting from A to B with ease. Families looking to book a 4 to6 person bunk compartment pay a flat rate of €199.

To book your next overnight sleeper journey head here.

There’s still a lot of work to be done when it comes to accessibility in rail travel. Many aspects of European railway systems do not meet the needs of disabled people due to social and physical barriers.

British startup Transreport have developed two apps with insight from disabled passengers that allow them to note areas of improvement and awareness in their journeys.

The first app, Passenger Assistance, has been modelled as the go-to for those needing assistance such as ramps and visual aids during their journey. This can all be requested on your phone with minimal fuss and the information is then passed on to railway providers.

Usually the person travelling would be expected to contact each rail company individually to communicate their needs. The unnecessarily complicated process often deters people from travelling in the first place as it can be time consuming and uncomfortable.

Users of the second app, named after the company, can make note of things such as broken equipment, lighting, and flooring that may have made their trip trickier than it had to be, even if they don't require any human assistance to navigate their journey.

It’s a big step in pushing companies to understand the barriers that may deter disabled people from using the railway and giving them greater choice when it comes to travel arrangements.

Head here for more information, as well as download links to each app.

Launching in April 2022, European Sleeper will transport passengers across Belgium, the Netherlands, Germany, and the Czech Republic and run three times a week.

If demand increases the operators plan to make the trip a daily part of Europe’s railway landscape.

The company is confident there is a rising need for better-quality rail travel in the wake of COVID-19 - its shares sold out in 15 minutes, raising €500,000 from an assortment of different financiers that want to see Europe’s interconnectivity thrive.

To find out more head here.

Here's the Crain solution: an #electric car that gets on a #highspeed train in a fully #automatic mode allowing you to cover large distances fast and safe, #recharging while riding on the train. pic.twitter.com/mo4kBcTlwL

This super tech-y railway innovation is probably furthest down the line, but is an exciting prospect nonetheless.

Italian tech startup Crain Mobility is melding the worlds of e-mobility and public transport with proposals for a system of trains large enough to charge and transport electric cars. The idea has been in development for two years and has received a lot of excitement from Europe’s transport community.

Crain plans to take underused freight yards on the outskirts of some of Europe’s biggest cities and turn them into dedicated terminals where driverless cars board the train and park the way you would on a ferry.

From there, the trip is yours to enjoy with onboard restaurants and rotating seats inside each vehicle that facilitate work or leisure. It has been built on the premise of making roads safer and cleaner without completely ignoring the need for cars in some situations.

You can find more information about Crain here.