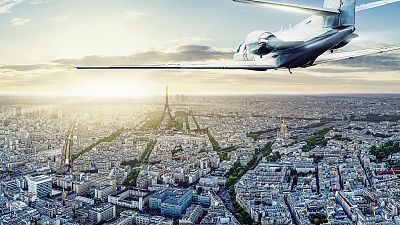 Paris to London journeys could soon be a thing for the past for jetsetters.   -   Copyright  Getty/frankpeters
By Lottie Limb  •  Updated: 23/08/2022

France is cracking down on the use of private jets for short journeys in a bid to make transport greener and fairer for the population.

Transport minister Clément Beaune said the country could no longer tolerate the super rich using private planes while the public are making cutbacks to deal with the energy crisis and climate change.

“We have to act to regulate flights on private jets,” he told Le Parisien on Saturday, partly in response to calls from the left-wing opposition for an outright ban on the polluting transport.

Private jets have been a source of outrage lately, as the city-hopping exploits of celebrities and billionaires come to light. A jet belonging to Steven Spielberg burned around €117,000 worth of fuel in the two months since June, according to flight tracking data.

A report from Transport and Environment (T&E), the European federation for clean transport, found that private jets are up to 14 times more polluting than commercial flights per passenger mile, and 50 times worse than trains.

Despite urgent calls from campaigners, France is unlikely to impose a total ban on jets.

Government spokesman Olivier Véran reaffirmed today that it is "obviously not a question of banning them", given their important role in the economy. But “the French should not have to feel as if it’s always the same people who are being asked to make efforts".

“We can understand that a Frenchman who is careful in his daily life is shocked by the fact that some of his fellow citizens can take a private jet to make flea jumps”, he told France Inter radio listeners this morning.

Heavy taxation and restrictions are the most likely measures to be introduced. Companies could also be forced to publish details on their use of corporate aircraft, for greater transparency.

France could impose restrictions on flights to well-connected cities

Under a climate bill approved in April, France banned domestic flights to cities which are just two and a half hours away by train. Beaune is now considering outlawing private flights to destinations that are well served by trains or airlines.

Leader of the green party Europe Ecology Les Verts (EELV), Julien Bayou, voiced his support for this measure, denouncing the billionaires who hop from Paris to London or Geneva. But he wants to go further, as EELV is tabling a bill next month to ground all private jet travel.

Making the ecological transition requires that everyone do their part, and if the super rich benefit from super exemptions, we will not be able to get out of it.

“Making the ecological transition requires that everyone do their part, and if the super rich, the super polluters, benefit from super exemptions, we will not be able to get out of it”, the Parisian MP told BFM TV.

How does France compare to other European nations?

It’s for good reason that France is looking to curb the gas-guzzling age of air travel. The country has the highest number of private jets in Europe according to recent aviation data, with frequent fliers to Paris and the French Riviera.

A tenth of all departure flights in 2019 were by private jets, T&E research found, with half travelling less than 300 miles.

But the government also believes that EU-wide action is the best way to tackle the problem. Beaune said he would push the issue at an upcoming European transport ministers’ meeting in October.

"The Minister of Transport proposes to carry out a consultation at European level to see if there are ways to offset CO2 emissions,” added Véran.

France is also incentivising people to switch from cars to bikes

As part of President Macron’s plea for “collective sobriety” in energy use, French citizens are also being encouraged to trade in their cars for electric bikes.

A maximum of €4,000 is available to low-income households in low-emission zones to subsidise the switch, with smaller amounts to help wealthier citizens.

Last week’s extension to ‘Le Plan Vélo’ - which launched last year - is intended to help the French catch up with the bike-loving Dutch, Germans and Danes.

The aim is to get 9 per cent of the country on two-wheels by 2024, compared to the current proportion of 3 per cent (the Netherlands boasts 27 per cent cyclists).

France isn’t the only country getting things right in this regard, of course. The bike subsidy scheme is based on the hugely successful rollout of e-bikes, scooters and mopeds in Lithuania, where, since 2020, people have been given up to €1,000 for handing in their old vehicle. This can even go towards public transportation credits.

If you feel like trading your government in for a better model after reading the above, there’s plenty more inspiration to take from the way other countries are greening their transport here.