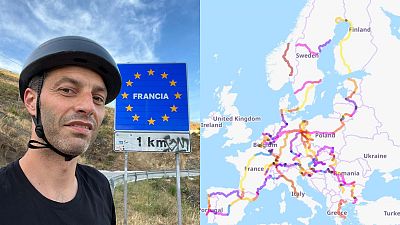 Train travel has a certain magic. Picturesque views as you zip along the track, comfy carriages that beat airplane seats any day and an overall feeling of romance.

Despite all this, trying to cross Europe by train can be a logistical nightmare.

Jon Worth wants to change that.

The Englishman is crossing every internal border in the European Union by train in only 40 days. A challenge he began in June.

The mammoth undertaking encompasses more than 150 train journeys, 83 border crossings and takes in 24 of the 27 European Union countries (Ireland, Malta and Cyprus are missing because they have no internal EU railway border) plus Norway, Switzerland, Monaco and Liechtenstein.

Why would you cross the whole of the EU by train?

The idea came about when Jon read about former Member of the European Parliament (MEP) Michael Cramer’s list of 15 railway projects for a better connected Europe.

Cramer had undertaken research and in 2015 compiled 15 missing links in Europe’s railway network that would be relatively easy and cheap to fix.

Worth decided to revisit the list to see if there had been any progress on the lines. He found that only one of the 15 had been completed.

“What I found then with Cramer was that it was a very intellectual exercise,” he tells Euronews Travel.

“He didn't go to those borders and talk to people and photograph the infrastructure and assess what it was like.

“So that was the starting point to basically say ‘how do I tell those stories to give colour to that political project.’”

Jon did a call out on social media asking his followers what wasn’t working in cross-border rail and why. Replies came flooding in with stories of difficulties all over the EU and it snowballed from there.

“So then I said ‘Well, how many days would it actually take you to cross all of these borders?’”

He calculated that it would take 30 days, but to make sure he had enough time at each stop he settled on 40 and the ‘Cross-Border Railway Project’ was born.

What are the difficulties European railways face?

As Jon sees it there are four main problems that need to be addressed.

“In some places there used to be tracks and the tracks are no longer active,” he explains.

“The second is there are tracks that exist, but no trains run.

“The third problem is the track exists and the trains run, but they run with a regularity or a timetable that doesn't work. So no one would use them because there's only one train a day or there's only two trains a week.”

The last problem, he believes, is to do with logistics. Not being able to book a ticket online for cross-border travel or the price skyrocketing for parts of the trip in different countries.

There’s no Skyscanner equivalent for booking trains which, industry sources say, is because some national train operators’ websites run on such old operating systems that they can’t be integrated with a centralised booking website.

How do I book a cross-border rail journey?

Jon recounts his experience of booking a train from Berlin, where he lives, to Strasbourg.

“If I put in Strasbourg in a train search it will give me a price of €120 for a single ticket,” he says.

“If I put in Berlin to Kehl, which is the final station on the German side, it will give me a price of €35. It’s only five kilometres from Kehl to Strasbourg.”

It costs a couple of euros to travel from Kehl to Strasbourg, so if you know the workaround the price for Strasbourg to Berlin drops from €120 to €40. But most people wouldn’t be aware of this.

Worth believes that there are lots of practical low-cost ways, like fixing these kinds of situations, that can improve train travel, but the political will is not there.

“Which politicians fix it? Well, the European Parliament's in Strasbourg. How many MEPs are on the phone to Deutsche Bahn going ‘Hey, look, this is stupid. Why don't you fix it?’” he exclaims.

“Is the European Commissioner for Transport [Adina Vălean] on the phone to Deutsche Bahn going ‘Why the hell don't you fix it?’ She's not because whenever she has an opportunity to take a train, she flies instead.”

How is the EU addressing problems with Europe’s railways?

Railway leaders reiterated their desire for high-speed trains to replace many flights in Europe in the next 30 years in Lyon earlier this month.

The European Commission has been taking some steps to improve the continent’s railways.

At the end of 2021, and in an effort to curb carbon emissions, it presented an Action Plan to boost passenger rail journeys and reduce travel times.

Lorelei Limousine, the EU climate and transport campaigner at Greenpeace, told Euronews in May that, “The action plan looks promising but we need to wait and see the concrete legislative proposals to see if there is an actual change”.

While the moves have been welcome, Worth is still sceptical.

“I'm not really convinced that the European Union institutions are ready to take the radical steps necessary to force that sort of cross-border cooperation that you would need between very national thinking railway companies,” Worth says.

“And what I've learnt from the trip so far is all of these problems often boil down to one side of the border wanting to solve the problem, but the other side of the border not being so keen. Like at the border between Belgium and Netherlands, for example, the EU would have to say, 'Hey, look, Belgium wants to rebuild the line between the two', but the Dutch side doesn't and so the EU would have to be quite pushy, quite determined towards the Dutch government to make a change there.”