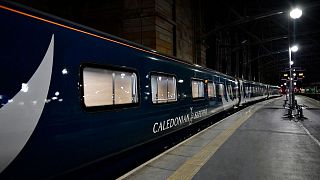 The sleeper train on the platform at Edinburgh Waverley.   -  Copyright  Caledonian Sleeper
By Lottie Limb  •  Updated: 11/10/2022

Imagine stepping into a room that’s not much bigger than a large closet and instead of despising your landlord, you marvel at its compact beauty.

An efficient use of space isn’t always a virtue, but it’s one of the most impressive features of the Caledonian Sleeper train, as I discovered on my journey from Edinburgh to London this year.

In the compartments, beds are tucked beside sinks, there’s a pull-out desk beneath the basin, and a strong magnet draws toilet lids to the wall, which can be dropped down for showering. The new trains were billed as “hotels on wheels” when they launched two years ago, harking back to an era of luxury travel that began in 1873.

Sleeping while travelling is an efficiency in itself: tucking sleep into the small hours as neatly as the narrow compartments in a carriage.

For train lovers, the Caledonian is a stylish experience that doesn’t let you forget you’re on your favourite mode of transport. It’s a desirable place to sleep because, not in spite of that, as you’re rocked asleep by your progress.

Ticket options range from seats to solo or twin bunks and en-suite double rooms. My ‘Club Room’ was functional as could be in 2022, but softened by ergonomic and thoughtful details: dimmable lights, beige plaid Caledonian wallpaper, and the perfect comfiness of two pillows.

What is there to eat and drink onboard?

Laid out on the bed is an ordering card for breakfast which you’re asked to fill out and hang on the back of your door within 30 minutes of boarding.

There’s also a ‘Highlander and Lowlander’ food and drink menu in the dining carriage or you can order it as room service. So you don’t need to worry about finding dinner at a late hour in town before boarding.

Given departure is at 11.40pm during the week and 11.15pm on Sundays, it’s likely you’ll have already eaten, but it’s still reassuring to know there’s plenty of midnight snacks and spirits to choose from in the plush Club Car.

There’s a focus on Scottish food, with classic plates of haggis and neep, and full 'Highland Breakfasts' in the morning.

Can you get a good night’s sleep on the Caledonian?

As an excited first time passenger, I was torn between staying up to maximise the experience - nursing a cocktail in the lounge, or simply sitting up with a reading light and book, basking in the novelty of it all - and getting my head down.

There’s no one rule, or lights out moment for the whole train - night owls and early birds can do as they please.

There’s no one rule, or lights out moment for the whole train - night owls and early birds can do as they please. Tiredness won out for me, and the reason I was there: to get some good rest.

I’m a light sleeper so didn’t sleep seamlessly; you obviously can’t sprawl in a single bed (the Caledonian Double looks like a different story).

But it is extremely cosy, and even when some jolts budged through my dreams, it was soothing to be reminded of where I was. Funnily enough, it actually felt weirder sleeping in moments when the train was still.

I can honestly say I arrived at Euston Station feeling like I was rested and well set up for the day (as much as a night owl ever can at 6.30am).

A more sustainable way to travel

The social acceptability of flying from Edinburgh to London, vice versa, or all domestic flights for that matter, is gradually being withdrawn.

A flight from Edinburgh to London emits 177kg CO2 per passenger, according to Transform Scotland, while trains use around 34kg per person. London North Eastern Railway (LNER) calculates this as even less - closer to 23kg of CO2 emissions. Using the same carbon calculator, a car journey emits 79kg CO2.

Short-haul flights are a major avoidable cause of global pollution. However it works out exactly, train travel is easily the most sustainable option for getting between the two great cities. And door to door it’s hardly much quicker to fly, with Waverley and Euston stations so centrally located.

You’ll also be saving yourself the stress and lost hours of queuing, checking in and paying for baggage.

What are the other perks of travelling by sleeper train?

Back to first impressions and what everyone wants to know: the goodies. Surely even the most seasoned business traveller experiences a small thrill at seeing the bag of freebies laid out on their bunk. Each sleeper is equipped with pillow spray, earbuds, a sleeping mask, and toiletries.

I stayed in a Club Solo Room, but the complimentary sleep pack is given to all passengers.

Tips and things to note about the Caledonian Sleeper

How much does the Caledonian Sleeper train cost?

Here’s the catch of course. Room prices vary considerably and rise to £345 for a Caledonian Double, squarely at the more luxurious end.

Small rooms are also prohibitively expensive for many would-be passengers; around £210 for a Classic Room, and £290 for a twin en-suite Club Room, depending on how far in advance you book.

The cheapest ticket on the train is for a seat, which starts at £50. These do look comfier than a regular seat; ergonomic perks include a footrest, reading light and shoe buffer, and you can put your small possessions in a secure locker for peace of mind. But it’s hardly the sleeper train option of dreams.

You can book tickets online, over the phone, or at any station ticket office, up to a year in advance. There are plenty of Scottish stations the sleeper travels between, including Aberdeen, Glasgow and Inverness.

Is the Caledonian Sleeper going to get cheaper?

The train service has a long history, running down the West Coast Main Line since 1873, and has changed hands a number of times.

Last week, it was announced that current operator Serco will be exiting the franchise early, in June 2023, after it failed to reach an agreement with the Scottish government.

Until a new franchisee can be found, the sleeper will be back under public ownership - an arrangement which many politicians in the SNP, Scottish Greens and Labour parties think should be made permanent.

But could it mean that cheaper tickets are on the horizon? Currently, the services are being pitched at high-end business customers, and that’s reflected in the prices, Scottish Greens transport spokesperson Mark Ruskell told Good Morning Scotland radio listeners.

It’s very much a niche form of travel at the moment, and that's very different to how sleeper services are used across continental Europe

“I think if we had a service that was reflecting customer demand, that was competing with the airlines, that had better connectivity with Europe - for example with with integrated ticketing [with the Eurostar], we could see passenger numbers increase even further on the Caledonian Sleeper.

“It’s very much a niche form of travel at the moment, and that's very different to how sleeper services are used across continental Europe,” he added. “It’s really one of our few connections to the rest of Europe that's low carbon, so we should be investing and developing a vision around that.”