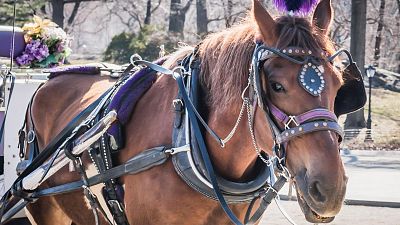 A charming, must-do tourist attraction or a cruel, outdated commercial activity? New York's horse-drawn carriages have operated since the 1800s, but some lawmakers now want to replace them with electric vehicles.

Recently, a video of a carriage horse collapsing on the streets of New York went viral, prompting a fresh wave of protests against the controversial tourist attraction.

Business owners have clapped back, claiming the industry is regulated and the animals are well looked after.

Why are people protesting against New York’s horse-drawn carriages?

For some, carriage rides around Central Park are as much part of the Big Apple as yellow taxis and Broadway shows. But for others, the horses-for-hire are not in keeping with the ethos of a leading progressive city in 21st century America.

Animal rights activists have been trying to shut down the industry for years. Opponents say the horses live in cramped conditions, are often malnourished and dehydrated, get spooked by cars and are worked against their will.

"They're literally treated as machines, and they're not machines," says Edita Birnkrant, executive director of anti-horse-carriage group NYCLASS. "This shouldn't be happening in modern-day New York City."

Last month, their protests gained steam when a video of a collapsed horse being slapped and shouted at by its owner on busy 9th Avenue went viral.

The driver continued to hit & yank on the horse instead of letting him rest.

This is NOT okay!

When a bystander questions, “Why are you slapping him?”, the owner replies “Because I’m trying to get him up. The horse is then seen being hosed down by police officers.

BREAKING: This horse COLLAPSED while pulling a carriage in NYC, likely from heat exhaustion, and has been down for over an hour.

Horses don’t belong in big cities where they’re put in constant danger because of cars, humans, weather, and more. pic.twitter.com/vXBVRJRjPB

This was not the first such incident. In 2020, a carriage horse collapsed and was euthanised in Central Park, where 45-minute-long rides cost upwards of €160. In June this year, the park also saw a frightened carriage horse gallop into oncoming traffic.

Their requests have not fallen on deaf ears.

"Manhattan is probably the worst place in the world to have a horse work, in traffic, in noise, with pollution, in terrible heat and terrible conditions," says New York City council member Robert Holden, who has introduced a bill to replace the animals with horseless e-carriages by June 2024.