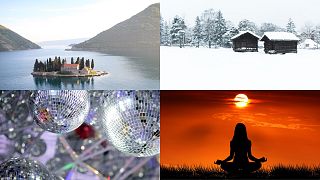 58 per cent of travellers want to get ‘out of their comfort zone’ next year, according to a Booking.com poll of more than 24,000 people.

Tourists will prioritise far-flung, adventurous trips - with 40 per cent of respondents expressing a desire for ‘complete culture shock.’

Nearly half (47 per cent) of travellers will seek out a destination with completely different cultural experiences and languages to their home country, while a quarter (24 per cent) want to visit lesser-known cities off the beaten track.

The poll - which surveyed people from more than 32 countries - is good news for the industry, says Booking.com senior vice president and chief marketing officer Arjan Dijk.

“While they may be navigating chaos and embracing contradiction, it’s undoubtedly reassuring for the industry to learn that travel is very much back on the agenda in what’s possibly a more exciting and creative way than ever before,” he says.

“Despite the global uncertainties, the industry will be strengthened by travellers in search of an escape that takes them out of their own reality.”

What are the emerging travel trends for 2023?

More than two-thirds (68 per cent) of travellers are feeling more optimistic about travelling next year compared to last year, the poll revealed.

But where will they go?

According to the research, 57 per cent of travellers want to go ‘off grid’ - though perhaps contradictorily, WIFI coverage is ‘non-negotiable’ for 54 per cent of people.

A third of travellers want a ‘back to basics’ feel - but others will escape modern life by looking back in time.

Many people are “glamourising the good old days”, reads the Booking.com report, with 84 per cent of people seeking a ‘nostalgic’ trip.

“There will be an increase in destinations previously popular in the 80s and 90s such as Budva in Montenegro or Bolzano in Italy, popular for its retro Christmas markets,” Booking.com predicts.

For some people, health travel appeals: 41 per cent of respondents say they are attracted to meditation and mindfulness getaways, while three in five (29 per cent) hope to find peace at a silent retreat.

Travelling for business will be back on the agenda next year. 40 per cent of UK workers want their employers to use the money saved from the shift to remote/hybrid working to pay for corporate travel or retreats.

How will the cost of living crisis impact travel in 2023?

Though travel is a priority for many people, the worsening cost of living crisis is altering people’s holiday preferences.

Half of UK travellers will look to save money by considering off-season destinations or longer routes on the journey, while over half (53 per cent) will be planning travel more in advance in the hope of securing a better deal.

But it’s not impacting everyone universally - 38 per cent admit that they plan to be more indulgent in their spending habits while on holiday to make up for the lack of travel during the last couple of years.