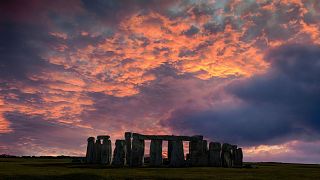 Some ancient cultures specifically marked the solstice - and their monuments remain. Stonehenge is one famous example.   -   Copyright  Canva
By Charlotte Elton  •  Updated: 18/12/2022

Christmas is fast-approaching - but it’s not the only winter celebration in the calendar.

Different cultures have celebrated the winter solstice since the dawn of human history.

The solstice - which falls on 21 December in the northern hemisphere - is the day with the shortest period of daylight and longest night of the year.

Also known as the hibernal solstice, it occurs when the North Pole reaches its maximum tilt away from the Sun.

So as the nights draw in, where in Europe should you celebrate this ancient tradition?

Why do different cultures celebrate the winter solstice?

The word “solstice” derives from the Latin word sōlstitium and translates to “sun stands still.”

Many ancient cultures were economically dependent on monitoring the progress of the seasons. The winter solstice marked the beginning of a difficult winter period - but also the rebirth of the sun, as the days incrementally begin to lengthen in the new year.

From Saturnalia - the Ancient Roman festival of Saturn - to Yule, the darkest period of the year has always been a season of feasting and celebration.

But some ancient cultures specifically marked the solstice - and their monuments remain.

So where should you spend the day?

Newgrange is one of Ireland’s most sacred sites. The huge kidney-shaped mound - spread over an acre - is one of the oldest astronomically-oriented structures in the world.

The structure was built as a Neolithic burial mound and site of worship around 3,200 BC, making it five millennia old. Archaeologists estimate it would have taken a workforce of 300 people about 20 years to build.

Each year on the winter solstice, a shaft of sunlight spears deep into the tomb, lighting up the chamber. The dramatic event lasts around 17 minutes at dawn on the solstice.

As thousands of years passed, the mounds entered Irish mythology as sÃ­dhe or fairy mounds. Newgrange was said to be the home of Oenghus, the god of love.

You’ll have to be very lucky to secure access inside Newgrange on the morning of the solstice.

Entry to the chamber on the solstice mornings is decided by a lottery that takes place at the end of September each year. About 30,000 applicants compete for 50 ballots.

But if you miss out, you’re still welcome to gather outside the Newgrange mound to mark the event

Stonehenge is one of the United Kingdom’s most remarkable monuments.

The origin and purpose of the monumental ring of massive stones - each around four metres high - has mystified awe-struck visitors for centuries. Mediaeval people speculated it was built by giants, or the wizard Merlin. Modern-day conspiracists describe the site as an alien landing pad - a hotly-debated theory in some corners of the web.

In reality, it was likely a site of worship, pilgrimage, and healing. Some of the people buried at the site hailed from as far away as the Mediterranean.

The structure may also have acted as a giant solar calendar. The site is aligned in the direction of the sunrise of the summer solstice and the sunset of the winter solstice. Archaeological evidence reveals that pigs were slaughtered at Stonehenge in December and January, indicating solstice festivals.

Each year, visitors from around the world still gather to mark the winter solstice and to see the sunrise above the stones. The monument is oriented to sunset, but visitors gather the morning after to celebrate.

The sun will rise at 8.04am on 22f December. Admission is free of charge. Entry to the monument will be from approximately 7.45am (or when it is light enough to safely enter) until 10.00am. Parking is extremely limited, officials add.

In Sweden, Norway, and the Swedish-speaking areas of Finland, solstice celebrations have merged with the newer tradition of St Lucia’s day.

This festival of lights is held on 13 December - the solstice by the old Julian calendar - to honour St Lucia, a young Sicilian Christian who was killed by the Romans in 304 AD.

Today, this event marks the start of the Christmas season, and churches across Scandinavia are filled with processions of young women in white robes with candles on their heads.

France, Portugal, Spain and US deal with extreme winter weather