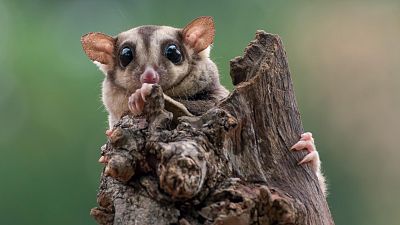 The new study can be used to make predictions for species not directly included in the research, such as this sugar glider possum.   -   Copyright  Canva
By Charlotte Elton  •  Updated: 23/08/2022

Llamas, bears and elephants are more likely to withstand climate change than mice and lemmings, according to a new study.

This is because they live longer and have fewer offspring, University of Southern Denmark researchers have found.

As extreme weather events become more common, all animals will feel the heat - but some are more vulnerable than others.

“We can see a clear pattern,” says biologist Owen Jones, one of the study’s authors.

“Examples are llamas, long-lived bats and elephants versus mice, possums and rare marsupials such as the Woylie.”

Over the past 10 years, researchers analysed population fluctuations in 157 mammal populations.

After cross-checking this data with information on extreme weather events, they determined which species have the best survival odds.

So too are the grizzly bear, American bison, klipspringer and Schreibers's bat.

This is because short-lived animals are more vulnerable to short-term population changes.

For example, a drought might decimate a mice population by destroying most of its food. Many of its reproductive members may perish before the drought is over.

In comparison, larger mammals can wait for better times to reproduce, or invest all of their energy in one offspring.

Does this mean that larger animals are safe from extinction?

Smaller mammals with shorter lifespans can also ‘boom’ back more quickly, due to prolific rates of reproduction.

However, all animals - including large ones that are best able to withstand extreme weather - are also threatened by various other existential risks.

“Habitat destruction, poaching, pollution and invasive species are factors that threaten many animal species - in many cases even more than climate change,” Jackson explains.

According to the UN Convention on Biological Diversity, we lose around 150 species every single day.