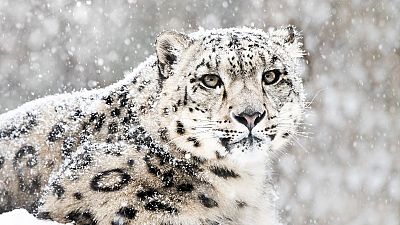 Snow leopards, which are on the brink of extinction, are being honoured in tonight's event.   -   Copyright  Getty via Canva
By Marthe de Ferrer  •  Updated: 30/11/2020

Biologists and ecologists believe we’re in the middle of the planet’s sixth mass extinction event.

We’re losing an estimated 150 species every day - that’s over 54,000 annually. Of all the species which have ever lived on earth, 99.9 per cent are believed to now be extinct.

This is why Remembrance Day for Lost Species (RDLS), held on 30 November every year, was first started.

It was created in 2011 by Laura Coleman, founder of ONCA, a Brighton-based art charity which seeks to marry social and environmental activism with creativity. Coleman uses the organisation as a platform for exploring stories about human-caused extinction, inspired by a visit to a small wildlife refuge in the Bolivian jungle.

Now RDLS has become a day to highlight the growing extinction crisis we are facing. The event is led by a coalition of artists, educators, scientists, historians and campaigners. Participants are encouraged to reflect on species already lost to extinction, as well as those on the brink of destruction.

How are white supremacy and species loss related?

Every year a different theme is chosen for Lost Species Day. Historically this has been a specific ecological story, but after the monumental Black Lives Matter protests this year and increasing awareness of intersectionality within environmentalism - this year’s focus is on anti-racism.

The organisers of RDLS encourage participants to “talk about species in their relevant cultural, ecological, historical and political contexts,” says the website. The team emphasise the political nature of extinction, using the example of how deforestation affects forest communities as well as driving species loss.

With over one million species facing extinction over the coming decade, RDLS believes it’s essential to understand the structures in place which are driving species loss, while also considering the human impact - especially in the Global South.

From Booker Prize winner Margaret Atwood to Oscar winner Emma Thompson, the star-studded line-up is raising awareness around the importance of RDLS. They hope that by remembering species which have already been lost, we can safeguard the future of those currently in danger.

The event is free, and tickets can be obtained here.