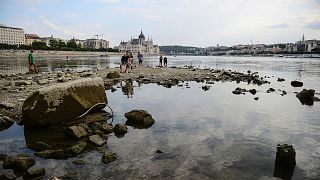 Europe’s major rivers are shrinking under the most severe climate-driven drought in decades.

It’s distressing enough to see mighty waterways like the Loire, Po and Rhine reduced to a trickle in places.  But the ongoing drought is also revealing how much we depend on them for trade, energy and transport.

The Rhine’s evaporation is especially concerning. At the chokepoint of Kaub, near Frankfurt, it is expected to fall below 40cm on Friday. This would make it impassable for some larger ships carrying supplies of oil, coal and gas.

German power plants are particularly dependent on the deliveries as Russia restricts gas flow, and the drought could compound the country’s energy crisis.

France, which uses the most nuclear energy in the EU, has also recently run into hot water on the Rhône and Garonne rivers. This week, electricity utility company EDF had to reduce output at some of its power stations as temperatures were too high to use river water to cool the plants down.

Meanwhile shocking photos of the Loire near its mouth at Nantes yesterday show far more river bed than water, with an essentially redundant bridge to the Loireauxence commune.

Across Europe, here’s how photographers have been documenting the devastating impact of heatwaves and drought on our waterways.

Flowing from the Swiss Alps, carving much of the Franco-German border, defining the German Rhineland and careering into the Netherlands before reaching the North Sea, the Rhine is a formative part of Europe.

As well as threatening shipping routes in Germany, its current low levels are causing problems for house boat owners on distributary branches, such as on the Netherlands' Waal River.

Italy's longest river, the Po, has been struggling to retain its width during the northern region's worst drought in 70 years. Water has already completely disappeared from some tributaries - upstream of Turin for example.

The river provides irrigation for nearly a third of Italy's agricultural production.

"The future of the harvest is uncertain," Giovanni Daghetta, who owns a 325-hectare rice farm in the province of Pavia, told Euronews last month. "What is certain is that if this drought persists it will do enormous damage."

Drought has not been formally declared in England yet - that decision rests with the Environment Agency - but the country has just experienced its driest July since 1935.

The source of the Thames has dried up for the first time, experts confirmed last week, moving more than five miles downstream from its original starting point in Gloucestershire.

Thames Water, which provides water to large parts of southeast England, is the latest utility company to announce a hosepipe ban.

The water level of the Danube near Budapest has dropped by 1.5 metres in the last three weeks, and rain isn't expected any time soon.

Rising water temperatures in Europe's second-longest river have also been worrying experts. It reached more than 25C for seven days in the Upper Palatinate region of Bavaria.

River heating can cause oxygen to drop beyond liveable levels for fish, and concerns have been raised for the Danube's trout.

A prolonged dry spell and heatwave made last July the hottest month in Spain since records started in 1961.

These extreme conditions left Spanish reservoirs at just 40 per cent of capacity on average in early August, well below the ten-year average of around 60 per cent, official data shows.

Some rural villages in the northeast of the country were left with drinking water for just four hours a day.

With an early heatwave in June and an unusually hot and dry month of May, the bed of the Loire has reached a lower level than usual. Water levels are so low that the river can be crossed on foot in certain places.

Two-thirds of the country is at a crisis level for drought. Four recent heatwaves have triggered weeks of wildfires and reduced the mighty Loire to a stream in some stretches.

Last week, the government said 100 villages across France were without safe tap water.