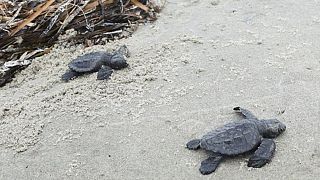 After being dismissed as unviable for sea turtle life decades ago, the Chandeleur Islands, off the coast of New Orleans, Louisiana, have seen the world’s most endangered turtles hatch again.

A local restoration agency was surveying birds when crew members spotted what appeared to be turtle tracks. Researchers began weekly visits to the islands to investigate further.

When nesting season kicked off, they were delighted to see more tracks.

“There was some high-fiving going on,” says Matthew Weigel from the Louisiana Department of Wildlife and Fisheries. Weigel and Todd Baker of the Louisiana Coastal Restoration and Protection Authority followed the tracks, finding two newborn Kemp Ridley turtles.

The Kemp Ridley is the smallest sea turtle on the planet, measuring about 60-to-70 centimetres when fully grown.

One small crawl for turtle, one giant leap for turtle-kind

The discovery marks the first time Kemp Ridleys have hatched in the Chandeleur waters in 75 years.

“Louisiana was largely written off as a nesting spot for sea turtles decades ago, but this determination demonstrates why barrier island restoration is so important,” notes Chip Kline, chairman of the Louisiana Coastal Restoration and Protection Authority in a press release.

Hatching season takes place during June and July, and monitoring of the waters is ongoing for more fledgling sea turtles.