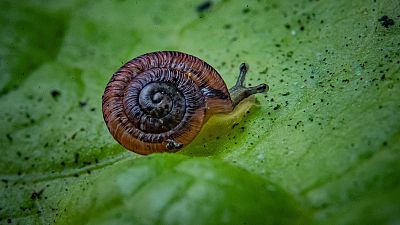 Two species of Madeiran land snails were believed to have completely disappeared for more than 100 years when they were found on one of the isolated Desertas Islands.

Fewer than 300 of each snail was discovered still clinging on, despite having been “fiercely predated” by invasive mice and goats introduced by Portuguese mariners in the 1400s.

Now, under the care of Chester Zoo and Bristol Zoological Society, their numbers are flourishing. 60 of the gastropods - whose babies are around the size of the Queen’s nose on a 5 pence coin - were flown to the UK, with 20 of those arriving at the conservation and charity zoo in Chester.

Specialists have successfully bred the tiny creatures for the first time ever in captivity, swelling their numbers to around 1,200.

“We can say that we have prevented two magnificent species from becoming extinct, which is an incredible achievement,” says Dr Gerardo Garcia, Chester Zoo’s curator of lower vertebrates and invertebrates.

Drawing on their experience of helping to restore populations of other imperilled invertebrates, the zoo staff created special breeding centres which closely replicate the perfect conditions for the snails to reproduce.

So what’s next for the plucky escargatoire of snails? (Yes, that really is their collective noun.)

Life after ‘extinction’ on the Desertas Islands

Boosting the snails’ populations was the first step in a recovery plan that is being supported by the International Union for the Conservation of Nature (IUCN).

Since their rediscovery, the IUCN has listed both species (Discula lyelliana and Geomitra grabhami) as critically endangered. A conservation project to rehabilitate them in their natural habitat is also underway with the backing of the Madeiran Government in Portugal.

The Desertas Islands are now protected nature reserves under Portuguese and European law and have been recognised as biodiversity hotspots for rare invertebrates, birds and reptiles.

Dinarte Teixeira, malacologist (or mollusc expert) for the Instituto das Florestas e Conservação da Natureza in Madeira, says "this project is a dramatic call for action to protect this unique land snail species.

“They are currently restricted to small pockets of refuge, genetically isolated, having been fiercely predated by invasive mice.”

Conservationists are now working to manage mice populations on the Desertas Islands, while restoring and replanting the habitat.

In the meantime, some of the tiny snails bred by these UK zoos will be flown 1,500 miles back to surrounding islands which have been left untouched by humans. Free from predators, these are the perfect sanctuaries for the gastropods to thrive in the wild.

The Chester snails “will form a safety-net population and become part of an international breeding programme that provides a sustainable future for the species,” explains Dr Garcia.

The snails’ success story is a blueprint for helping other endangered reptiles and invertebrates in the region - starting with two more critically endangered snail species.