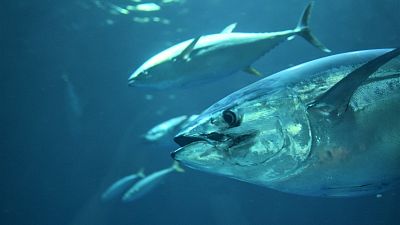 There’s good news for the tuna you’re used to seeing in supermarkets, like Atlantic and Southern bluefin. These and two other species are showing signs of recovery from overfishing.

They have been hunted by commercial fishing companies for decades but now it’s hoped they might not go extinct, as previously feared.

The news comes from International Union for Conservation of Nature (IUCN) which has just released an update to its Red List.

This list shows the extinction risk of thousands of species around the world. Unfortunately, more than 38,000 species are still facing the threat of extinction, but there were signs of recovery for some.

In 2011, most species of tuna were considered to be at serious risk of extinction. With 6 million tonnes thought to have been caught in 2019, these are some of the most commercially valuable fish in the world.

In this update, the status of seven commonly fished tuna species was reassessed and there was good news for four of them.

“We need to continue enforcing sustainable fishing quotas and cracking down on illegal fishing.”

The update emphasised the need to ensure conservation is a global effort as many regional tuna populations are still suffering.

Though the number of Atlantic bluefin tuna originating in the Mediterranean has increased by 22 per cent in the last 40 years, the species’ smaller native population which spawns in the Gulf of Mexico has halved over the same period. Yellowfin tuna also continue to be overfished in the Indian ocean.

Other marine creatures are also facing the impacts of climate change, habitat loss and overfishing. The IUCN update found that nearly 40 per cent of sharks and rays are now threatened with extinction.

But IUCN director general Dr Bruno Oberle says that the recovery of overfished tuna species is a “powerful sign”. Despite increasing pressures on our oceans, species can bounce back if we commit to truly sustainable practices.

“States and others now gathered at the IUCN World Conservation Congress in Marseille must seize the opportunity to boost ambition on biodiversity conservation, and work towards binding targets based on sound scientific data.”